The latest and today's weather in Cozumel , Mexico updated regularly

Cozumel, or as the Mayans called it, Ah Cuzamil Peten - the island of swallows, is one of the most beautiful places you'll find on the south-eastern side of Mexico. Bordered by the blue waters of the Caribbean Sea, this little patch of paradise can be found just off the eastern coast of the Yucatan Peninsula, opposite Playa del Carmen. Home to the spectacular Mesoamerican Reef, the world's largest coral habitat, and rich with thick rainforest and mangrove, Cozumel thrives under a sub-tropical savanna climate throughout the year, and experiences regular rainfall.

A wet season unfolds from June until December, while January to May give way to hot and dry weather. The monsoon is a regular seasonal guest, often pummeling the island with sudden and heavy outbursts of rain. The Municipality of Cozumel also includes two mainland areas of Solidaridad: Calica, Xcaret and the stupendous XelHa Water Park.

It's always hot and humid in these parts of Central America, with seasons and their peaks quite different from the usual continental climates. In fact, average temperatures rarely go below 20°C, and often range between 23°C and 32°C; this encompasses both average highs and lows. The gorgeous Caribbean Sea is permanently perfect for swimming, with an average temperature between 26°C and 28°C, even in winter. The winds are also friendly, particularly in the dry season, averaging at 4m/s through March, and rising to 8-9m/s through September - unless there's a tropical storm, when that figure jumps dramatically. Most of the winds blowing over this Mexican gem are eastern and south-eastern tropical winds, while the winters experience a slightly cooler breeze from up north, offering a welcome respite.

From March until May, the scorching spring rolls dry with average temperatures rising from 25°C to 29°C towards June, with highs around 30°C. The night-times also linger in the mid-20°C range, and the humidity reaches high peaks of up to 86% towards the end of April and well into May, which is often quite tough for those not used to it. We city people like to say: air conditioning is essential if you want to spend your spring holiday in Cozumel. Seriously.

Funnily enough, spring is actually the driest time of the year, with May having the least annual rain of only 12mm in a month. Hence this is the best time to visit if you're looking for uninterrupted sunbathing sessions and calm waters for deep-diving, when the sun shines gloriously all over the island and nature welcomes you into its little Mayan bosom.

The summer season sees average high temperatures steady at 31°C, with hot and humid nights. You'd normally think that's great, so let the music play, pack up the sun lotion and go! Just remember one thing: summer is the monsoon season on the coast of the Yucatan Peninsula. This means that those precious bright and sunny days will be often receive sudden onsets of moderate to heavy rain, particularly in the afternoons. You can find yourself soaking in some natural vitamin D on the white beaches of Cozumel, to be drenched in the next minute, stumbling through thick sheets of water and growing puddles as you make your way to cover. Then, just five minutes later, the sun will pop back out, and leave you wondering as to what just happened. That, dear travelers and vacationers worldwide, is summer in sub-tropical climates by the seas. In fact, September is the wettest month of the year with a whopping 247mm of rain, with July following behind with 192mm in just 4 days! 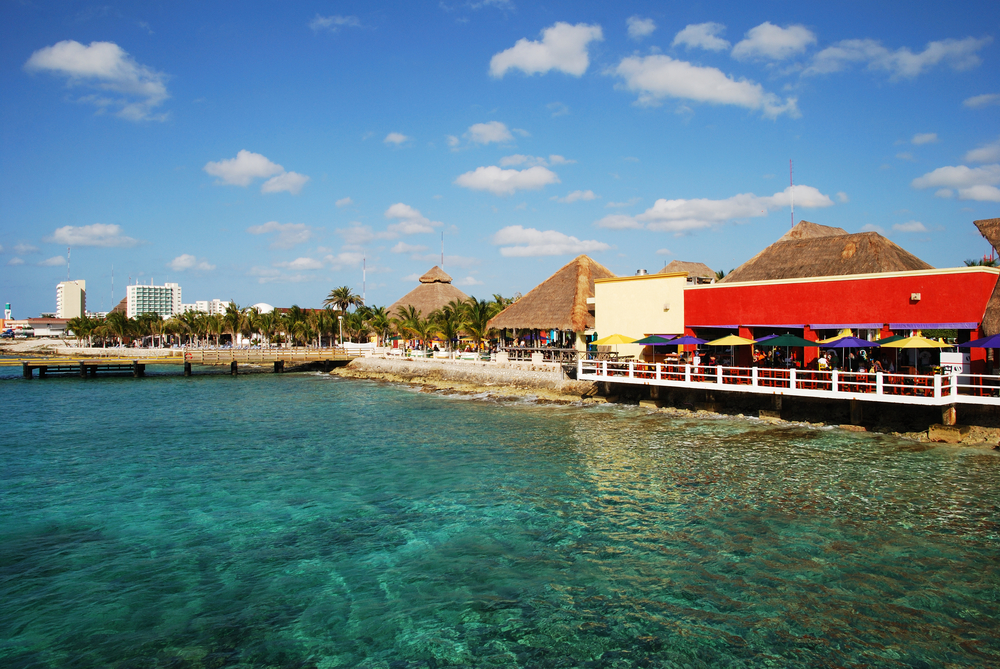 Stretching only from October to November, the autumn season doesn't do much other than lower the average temperature to a milder 27°C. The nights continue to be warm with lows of 22°C, in conjunction with continuously high levels of humidity, measuring averages of up to 85%. While the feisty hurricane season has ended, rainfall continues and October is the third wettest month of the year, but you will still find beauty in the sunny days. In fact, there are 8 hours of sunshine per day which is more than European countries experience at this time of year, allowing for plenty of time to experience the adventures waiting all around this beautiful island.

The sea coast in Xcaret Park

Average high daytime temperatures do not leave the 28°C mark from December until February, but winter nights do get more comfortable at a lower 20°C to 22°C and temperatures can plateau at a milder 24°C. In fact, temperatures may drop to 16°C when the northern winds blow over the island. Humidity goes down to a more comfortable 65% average, and December marks the start of drier weather, with February being the second driest month of the year with only 13mm of rain. Even better, you can still go swimming and diving, as the splendid Caribbean regains its calm and retains a friendly water temperature around 27°C perfect for a winter beach break.

There's a slightly more unpleasant bonus to Cozumel's long and wet summer. This gorgeous island is on the western fringe of a popular path for tropical cyclones. The hurricane season starts in July and holds steady until the end of October. The risk of hurricanes hitting the Yucatan coast is low from July to August, but then September comes along and dials everything up to 11. Humidity reaches its annual peak, at a difficult 95%, and the dew point - which is the best tool used to define comfort with humidity levels, jumps from a comfortable 17°C to an oppressive 26°C.

Cozumel is no stranger to hurricanes, as it has been hit 54 times since 1871. Most recently, in 2005 it was hit twice, causing serious damage to the rainforest, the coral reef, real estate and San Miguel's sewer system. September is in fact in the red for violent tempests, so we recommend high levels of caution if you're planning a holiday on this side of Mexico. Always take precautions, check the live weather forecasts and follow local emergency procedures.

Cozumel is one of Mexico's most popular resorts, seeing an influx of well over 2 million tourists every year. Surprisingly, from a socio-economic point of view, it is still considered to be mostly underdeveloped, but its tourism industry is thriving spectacularly, thanks to its white strips of sand bordering bright azure waters, its extensive diving and snorkeling activities around the breathtaking Mesoamerican Reef, as well as the fact that it is a popular cruise ship port of call for many Caribbean cruise liners.

This little island spreads over 647.33 square km, its highest point at just 15m above sea level, and its population is steady at cca 100,000 inhabitants. It's a flat island, based on limestone and karst topography. It's covered in mangrove forests, riddled with rare and endangered endemic species of animals, such as the elusive toadfish, the ancient black spiny-tailed iguana, the blue land crab and the Cozumel fox. It's particularly known as the home of rare but beautiful birds, such as the Cozumel emerald, the nearly extinct great curassow and thrasher, as well as the vireo and wren.

It was once inhabited by the fascinating Mayan civilization, and its ruins will tell you more about the rich heritage they left behind. Cozumel is also home to a stunning underwater art museum, several natural parks and incredible rainforest. Perhaps its greatest attraction revolves around its shores, skirted by the amazing Mesoamerican Coral Reef, as well as its cenotes, deep water filled sinkholes formed by water sneaking through the soft layers of limestone soil throughout millennia - the latter are restricted to qualified cave divers only.

Cozumel is home not just to the world's fifth-largest underwater cave, but also a warm and welcoming people, whose traditional values, fascinating culture and delicious cuisine will have you coming back for more.