The Canaries are often called 'Islas Fortunadas' (the Fortunate Islands), due to their clement year-round weather. In the sub-tropical zone, one of seven islands that make up the Canary archipelago, Lanzarote enjoys mild winters, hot summers and relatively little rain.

Puerto del Carmen is located in the south of the island on the East coast, facing the Atlantic Ocean. The southern-most part of Lanzarote is generally hotter and drier, sheltered somewhat from East Trade Winds by the hilly, mountainous region in the center of the island. Some of the highest temperatures in Lanzarote have been recorded in this area, and, with over a million visitors a year, Puerto del Carmen is Lanzarote's most popular resort.

With 6km of golden, sandy beach; outdoor terraces along the traditional fishing harbour where you can enjoy delicious fresh seafood; and the Old Town with its unspoiled Spanish charm It's easy to see just why Puerto del Carmen attracts so many visitors!

Winter in Lanzarote falls between December and February. While the weather is generally still quite warm and pleasant, conditions at this time do vary across the island.

In Puerto del Carmen in the south, and in coastal areas, it is likely to remain fairly sunny with clear skies and pleasant temperatures (between 14C and 12C, on average). However, in the north and over the hilly, mountainous regions of the island it is likely to be overcast, with air masses from northern latitudes ensuring temperatures feel much cooler.

December also sees the start of Lanzarote's rainy season and rainfall averages of between 27 and 15mm are to be expected across the island; which is still a relatively small amount of precipitation. Showers are also usually short-lived, so they won't disrupt your holiday too much.

There are occasionally weaker dust storms on the island between October and December, though they are likely to be mild and infrequent; the worst of the storms are reserved for late spring.

Due to the high rainfall averages and low sea temperatures, most visitors wouldn't choose Puerto del Carmen for a beach holiday in the winter months. However, with an average of 7 daily sunshine hours, low UV levels, and still pleasant temperatures, it is an excellent time for sports and other outdoor activities on the south side of the island and still possible to do a little sunbathing. 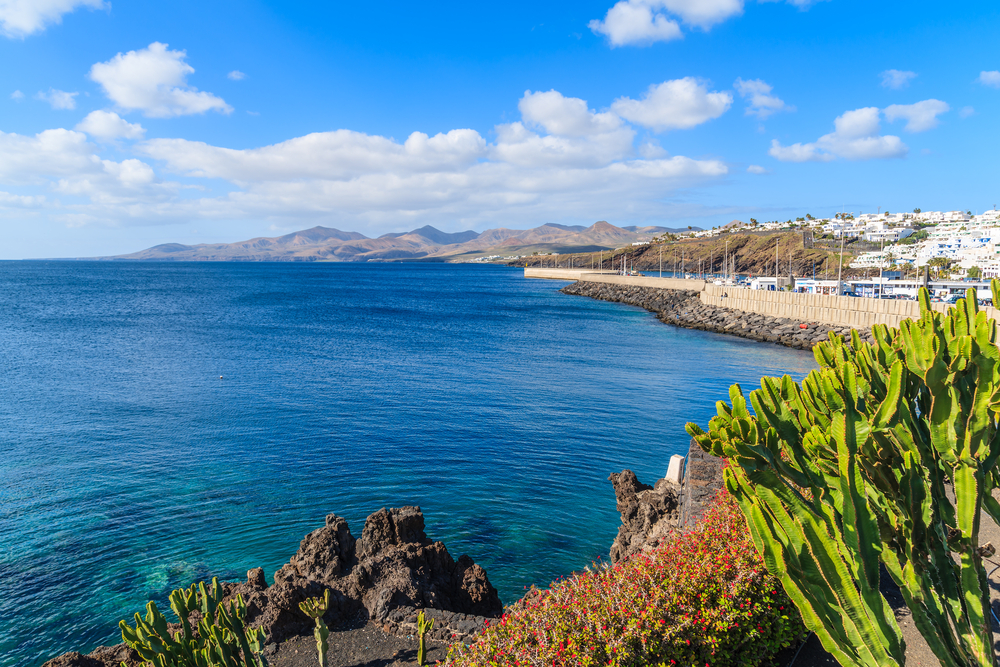 The weather in Puerto del Carmen is much more predictable in the Spring. Temperatures begin to rise, with average highs of between 17C and 18C, and the rainy season gradually comes to an end; just 2mm of rainfall over 2 days is expected on average by May. Though sea temperatures remain relatively cool, at between 18C and 19C.

Where cloud cover can be expected most days across the island in the early part of the season, by the end of May coastal areas like Puerto del Carmen will begin to see clearer skies. Also, by the end of the season, afternoon sea breezes return and help make the warmer temperatures feel much more pleasant.

Spring is an excellent time to enjoy a mix of outdoor activities, sightseeing and sunbathing in Puerto del Carmen. Sea temperatures are gradually beginning to be warm enough to enjoy swimming, and once the dust storms have passed, with warmer temperatures and a greater number of sunshine hours, it is a good time for sunbathing while you can still avoid the summer crowds. With cooling afternoon sea breezes in coastal areas, and temperatures still not at their height, it is also still possible to make the most of outdoor activities, sightseeing opportunities and sports on the island. 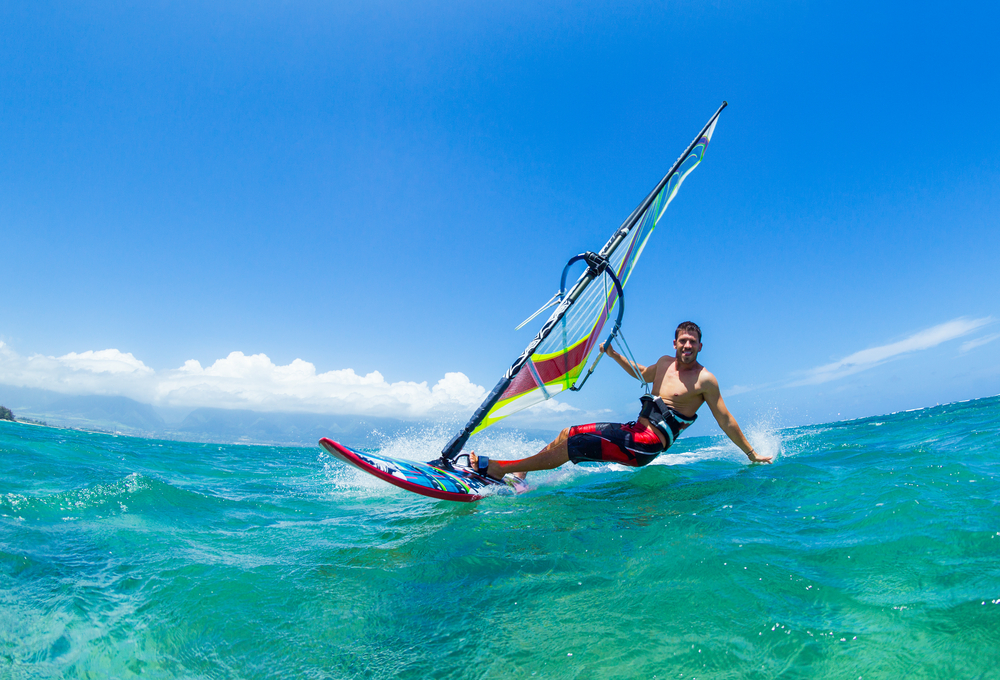 The weather in Puerto del Carmen in the summer is usually quite unvarying. The hottest time on the island, temperatures often exceed 30C; the hottest temperature ever recorded at this time is over 42C. Average daily temperatures are between 17C and 20C, with highs of between 21C and 23C.

The south of the island is also sheltered from north-east Trade Winds which amplify the effect of afternoon sea breezes in other areas of Lanzarote. Those same sea breezes do help lower temperatures in coastal areas however, making the heat somewhat more bearable.

The humidity is quite moderate and it will almost certainly be dry (there is only one day of rainfall and less than 1mm of rainfall expected between June and August). While the mornings may start off a little cloudy, this usually clears before midday to make way for clear, blue skies. You can also expect warm sea temperatures at this time, on average between 20C and 22C.

The hot, dry weather and warm sea temperatures makes this the perfect time for sunbathing, swimming and watersports. However, bear in mind that this is peak season and the beaches will be crowded. The high temperatures and crowds can also make sightseeing and outdoor activities or sports quite uncomfortable, so holidays at this time are usually confined to either the beaches or organised tours. 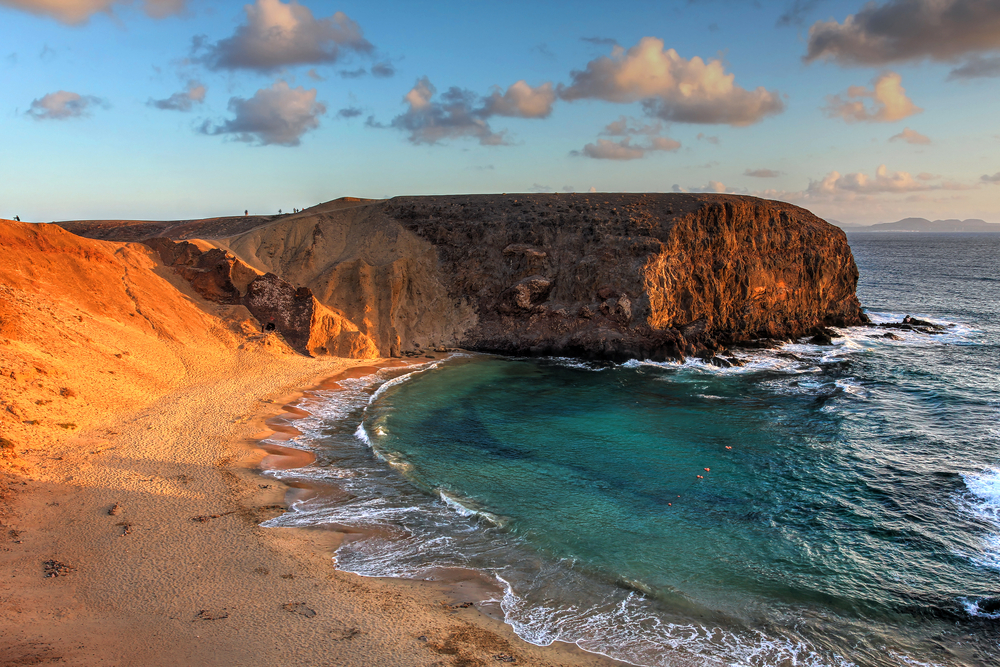 Autumn is a transition season in Lanzarote, as temperatures gradually begin to cool and the dry, arid landscape is transformed by a few millimetres of rainfall in preparation for the comparatively colder, wetter winter months. It's still a good time to visit, as with peak season passed, it's far less crowded and conditions remain warm and temperate.

There are still around 7 daily sunshine hours and average temperatures of between 16C and 20C, highs of up to 23C in September, with temperatures gradually declining and lows of around 13C in November. There's likely to be very little rainfall, though more than is seen in the summer months; between 3mm in September and 17mm over up to 5 days in November.

While it is relatively cool, with maximum sunshine hours, the autumn is a great time for sightseeing, sports and outdoor activities in Puerto del Carmen. While a beach holiday is still very popular in the resort in September, as temperatures drop most visitors prefer to make the most of other activities on the island.

Lanzarote is known for pleasant, temperate year-round weather conditions; there are very few weather hazards and nothing likely to cause any serious disruption.

Between February and March, there are often several days of severe dust storms. Milder storms also occur some years between October and December. The dust storms are caused by changing weather patterns over North Africa. At these times, the Saharan Air Layer passes over Lanzarote and Fuerteventura, carrying dust and sand from the Sahara Desert (a phenomenon called "Calima" by the Canarians). The storms are therefore worse in the years when the Sahara receives very little rain.

Visibility can be extremely poor at these times; as low as 200 meters, and those with asthma or other respiratory complaints should take extra precautions as the dust can aggravate these conditions. Storms can also prove quite disruptive, with planes unable to land or take off until the dust clears, and other transport systems stalled.

UV levels are very high throughout the summer in Lanzarote. UV radiation is responsible for sunburn, eye damage, skin cancer and affects skin aging; the scale ranges from 0 (very low to no risk) to 11 (extreme risk). Puerto del Carmen sees UV levels of between 4 in the winter and 11 at the height of summer. It is therefore important to ensure adequate care is taken to protect the skin and eyes.