The latest and today's weather in Skiathos , Greece updated regularly

Skiathos is a beautiful Greek island in the Aegean Sea. In spite of its modest size the island boasts over 60 beautiful beaches and numerous appealing vacation spots. Travellers from all over the world enjoy the island's pleasant climate, friendly people and laid back Mediterranean attitude. Some of the more famous beaches found on Skiathos include Trulos, Vromolimnos, Koukounaries, Asselinos, Megali Ammos and Mandraki.  Skiathos is part of a chain of islands known as the Sporades. There are 24 islands in this group and four of them are permanently inhabited. The name Sporades means 'scattered' an accurate way to describe this grouping of islands.

The island of Skiathos has an airport situated at the northeast part of the island next to a lagoon, as well as ferry and boat services in between the other islands. This makes Skiathos accessible to the other islands, plus visitors can arrive by plane. The roads and bus routes are well developed throughout the island to accommodate tourists in the busy summer months. Buses will travel frequently during the summer months when the tourist influx is at its heaviest, before tapering off in the winter when transportation is still available just not as frequently.  Skiathos is beautiful all year round with temperate weather. It is rare to find a day that is unbearable for heat, cold, or even rain.

Summer is arguably the best time to visit the Sporades Islands. Some of the weather in other resorts around the Islands is hot with low humidity, so many of the resorts around this island group fill up with tourists enjoying the dry heat. Due to its location, the islands will most likely always have a breeze and it is the seasonal winds that help make the heat more bearable. The weather lends itself perfectly to lazing around on one of the island's many beaches and soaking up the sun. Temperatures in the summer will be in the 70s-90s and will be the warmest of the seasons but the breeze will make even the heat bearable.

In Ixia, Spring and summer are basically the same season. The summer and tourist season begins in April, which is when the rest of the globe experiences the first inklings of spring. The islands in the Sporades group have a heavy tourist season from about April to October. Skiathos Island is one of the most popular islands in the group due to its numerous beaches and beach-based activities. With a mild temperature year round, it is a sure bet that whenever you travel to Skiathos Island you will enjoy a good holiday. The temperatures will be a bit lower during the spring but you will still have warm days in the 70s and 80s. 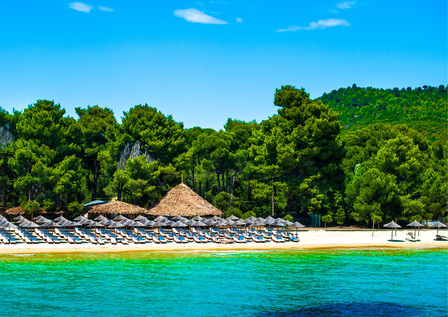 While winter is considerably milder than many places in Europe and around the world, Skiathos Island is moderate yet slightly rainier. You may experience a shower or two if you holiday there in the winter months. The low temperatures can reach the 30s and climb to the 70s. The weather has more variation during the winter months and you should keep that in mind while packing and planning your activities.

Autumn and winter mirror the spring and summer conglomeration. There are basically two main seasons in Skiathos Island: summer and winter. Neither is extreme, however, there is a clear distinction with a drop in temperature and increase in rainfall. But even if you can only travel during the winter, you will not be disappointed. Autumn will be slightly cooler than the rest of the year but you will probably not feel a major change in temperature.

Because the weather in Skiathos Island does vary, planning your holiday ahead of time can be helpful with the packing process. One of the best options is to pack with the ability to layer clothing, especially if you are travelling outside of the summer months when the weather is going to be warm regardless.

During the summer months it rarely rains, the winds (N, NW, NE) are calm to moderate, there is plenty of sunshine and the temperature is 20- 30 C (or 68-86 F), though at night it gets a bit chilly. In spring and autumn the wind blows from the North (NE - NW) but every 3-4 weeks intervals, the winds usually turn direction and blow from the South. In April and October the weather is a little bit cooler. A phenomenon that you may notice while visiting Skiathos Island is the strong, cooling winds that sometimes blow in. These winds are known as the Meltemi winds and come at just the right time, the hot summer. These winds cover the Greek Islands with much needed respite from the stifling heat of the summer months. These winds can be very powerful and if you are on the water sailing or enjoying another type of wind/water based sport, exercise caution. They are strong and seem to funnel in from the channels of Trikeri and Orei close to the Skiathos Island.  These winds are not to be taken lightly and have been known to cause damage to boats, windsurfers and offshore property. However, the good thing about taking a holiday to an island, is that unless you are visiting during a hurricane, the bad weather will not last forever and usually within hours the grey skies are son replaced with sunshine. If you are looking to enjoy a holiday with moderate temperatures and a rare shower, Skiathos Island is a great choice.