The latest and today's weather in Carcassonne , France updated regularly

Perched on a hilltop, Carcassonne is a charming old town located in the south of France in the Languedoc region. The town is famous for its ancient mediaeval walled castle and citadel which is filled with towers and cobbled streets.

The general climate found here is best described as Mediterranean which means that summers are hot and dry while winters are mild and cool. Summer is the most popular time for tourists to visit the region, when the weather is at its warmest and sunniest.

Thanks to its location, Carcassonne enjoys a lot of sunshine with over 300 sunny days a year on average. The weather is also generally quite dry all year round and annual rainfall is low at a little under 600mm a year; rain can occur at any time of year but is most likely in late autumn and early winter.

Carcassonne and the surrounding region is one of the warmest places in France with an annual average temperature of around 14°C and highs that peak at around 28°C in the height of summer. The warm and sunny weather is perfect for exploring the many historical attractions of Carcassonne or enjoying the culinary delights available in the cafés and restaurants dotted around the town.

While the weather can get hot, Carcassonne is located in one of the windiest regions of France. In fact, locals call the Languedoc region the "country of the winds". Winds often blow in from the west, north and south which cool things down a little.

If you're planning on visiting Carcassonne, keep reading for more information on each season, or check out our weather forecast for up-to-date weather information before you travel. 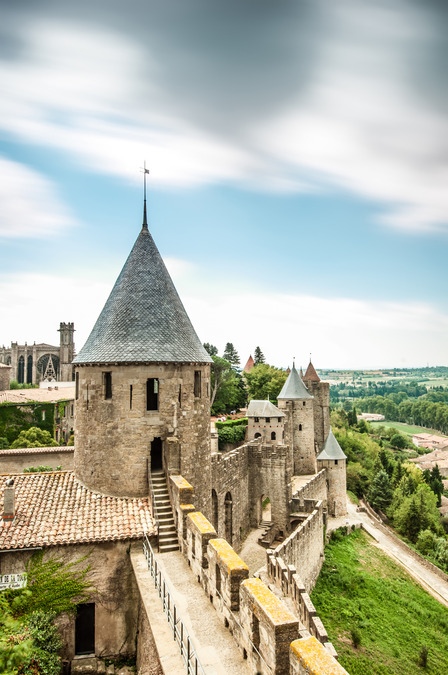 Carcassonne enjoys fine summers and an abundance of sunshine, which is why it's the most popular time of year for tourists to visit. As you would expect from the South of France, the weather is idyllic at this time of year.

The hottest months are the peak summer months of July and August when the average temperature is around 23°C. Daily highs hover around the high 20s, peaking at 28°C in July. June and September also enjoy good summer weather with temperatures averaging around a pleasant 20°C.

While summer temperatures are generally quite comfortable, if the hot sirocco wind from North Africa is prevailing, it can get very hot and dry in the region and the wind can even bring desert sand with it. This only happens on a couple of days each year, but summer heat waves occur quite often, bringing very hot temperatures, even up towards 40°C on extreme occasions. This is worth bearing in mind if you prefer more comfortable temperatures.

Rainfall is low in summer though not unheard of. July is the driest month with an average of just 20mm of rainfall and June and August are pretty dry too, seeing about 40mm of rain each. Come the end of the summer, rainfall and humidity begin to increase, and lightning storms can sometimes occur.

One of the main draws to Carcassonne is the beautifully sunny weather that prevails in the summer season. From May until August you'll see 7 glorious hours of sunshine a day ideal if you want to spend most of your time outdoors.

Summer really is a great time to visit Carcassonne; good weather is almost guaranteed and the Carcassonne Festival takes place at this time, which is a celebration of the arts with numerous music, theatre and dance performances. Remember though that this makes it the most popular time to visit the town, so there can be heavy crowds.

After the hot summer season things start to cool down a little in autumn, though the region still enjoys good temperatures. In fact, many prefer the slightly more comfortable temperatures at this time of year. The average is around 15°C in October and 10°C in November. Night time lows can get rather cool though, dropping to just 7°C at the end of the season, so holiday makers should pack some warm layers if travelling at this time of year.

Autumn can be a great time to see the sights of Carcassonne. While you will experience some rain and cloud when visiting at this time of year, the crowds dwindle and the temperature is not as oppressive as the summer.

Winters are quite cold in Carcassonne, however unlike other parts of Europe, the weather never gets too bitter or freezing. Between December and February, the average temperature is between 6°C and 7°C while highs can still reach up to 10°C. Nights are the coldest time, with lows that drop to just 3°C in January, which is the coldest month of the year. This can feel quite chilly and a warm coat will be required if visiting Carcassonne in winter. Luckily, temperatures rarely drop below zero.

The weather can be a bit rainy in the winter months; in fact, January is one of the wettest months of the whole year with 70mm of rainfall. December and February see 50mm and 60mm respectively. For this reason, holiday makers should expect some clouds and rainfall, but you'll certainly see the sun more than in places such as the United Kingdom at this time of year.

In winter, snow can fall on occasions when the temperatures stay low for prolonged periods. The nearby Ariège and Pyrénées mountains see frequent snow throughout winter and so Carcassonne is often used as a base for skiing holidays; the nearest ski resort is around one and a half hours away by car.

Between March and May, spring is arguably the best time to visit the Carcassonne region, especially late on in the season. Temperatures are good, but not too hot, and the sun shines frequently.

Early spring can still be a little unpredictable, with temperatures ranging between 6°C and 14°C in March, but by mid-May you can enjoy plenty of sunny days and daytime temperatures in the low 20s. In fact, high temperatures can even reach a balmy 22°C this month, which is perfect for walking around and exploring the area in comfort. One thing to remember though, is that night times still remain relatively cold throughout the spring season, so al fresco dining may be out of the question of an evening.

Rainfall begins to decrease towards the end of the season as the damp, cool winter weather gives way to the warm, sunny days of summer. March and April see 70mm of rainfall, but this drops to 60mm in May. Sunshine levels also increase in May, rising to 7 gloriously sunny hours per day which is almost as much as the peak summer season.