The latest and today's weather in Brittany , France updated regularly

The weather in Brittany can be characterised into clear seasons, with a wet and cold winter followed by a warmer spring, a summer that reaches warmer temperatures and sees lower rainfall, and a dry autumn which soon switches back into cold weather again. The great news here is that there is little to no chance of extreme weather. The most you will come across is a thunderstorm, and though the rain and winds can be intense, it is rare for damage to be caused beyond the occasional felled tree. There's nothing to worry about on this front!

As part of France, this European region experiences generally mild temperatures, which are on the colder side compared to tropical climates. However, the winters can also be very mild compared to more northern countries, with the temperatures never falling below freezing on a monthly average basis. This means that whenever you visit, you can be sure to enjoy a climate that never requires more than a winter coat or an application of suntan lotion to keep you feeling comfortable. 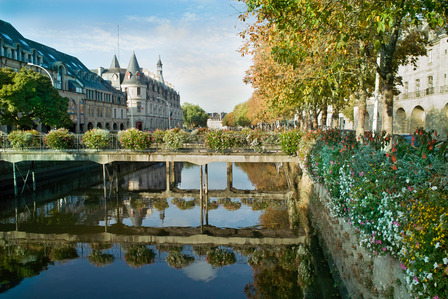 The winter season in Brittany stretches from November to February, spanning four months of the year. It can be characterised by cold weather and lots of rain. The highest daily average temperature falls in November with 10°C, while the rest of the months see a daily average of 8°C.

Highs and lows are also not very changeable from December to February, and in the winter they span the highest point of 12°C down to the lowest point of 5°C. This means that no matter what happens, you will need to pack warm clothing! As for rainfall, this is highest in December with 62mm falling over 16 days. 54mm comes down in January, the driest month of winter.

Spring begins as the weather takes a small lift in March, and carries through to May. These three months are all about the changing seasons, as warmer temperatures gradually build up. We start with an average temperature of 9°C in March, up to 11°C in April, and the biggest change to 14°C in May. For the average highs and lows, this means a dramatic range in figures, going from 6°C all the way up to 18°C. Spring can be a time of big differences, so pack for warm, cold, wet, and dry weather.

As for rainfall, the good news is that it is dropping down in preparation for the summer months. 43mm will fall in March, 42mm in April, and 44mm in May, showing us that spring is a fairly steady time for these numbers. This is a big drop from the winter months, however, as we lose over 15mm on average across each month.

Will you be spending a lot of time on the beach? Maybe not yet, as the average sea temperature moves from 12°C only up to 14°C. This is a good time to start exploring, however, as longer days come into force. 6 hours of sunshine in March becomes 9 hours a day in the two following months. That's enough time to fit in all the sightseeing you need before an evening meal against the sunset!

The summer is really the time that you want to think about hitting the beach. It starts in June when the average sea temperature climbs up to 16°C, and carries you through to 19°C in August before levelling out at 18°C in September. Sun hours are also massively up for those who want to work on their tans: 11 hours in June marks the longest days of the year, while the rest of the season averages out at 8 to 9 hours a day.

Rainfall is also at its lowest during this season specifically in September, when just 24mm is going to come down and August with 26mm. This is a big drop from 33mm in June and 38mm in July, and it certainly comes at the right time, coinciding with the higher temperatures for a perfect summer. The highs and lows across the summer range from 22°C down to 12°C.

The daily averages are where you see the big change. 16°C in June becomes 18°C in July and August, only dropping back down to 16°C in September. While it may not be the kind of tropical heat that you would find closer to the equator, it is certainly warm enough to keep you comfortable.

The autumn is a very brief period in Brittany, giving you a short amount of time to adjust before the colder weather hits again. Thanks to the longer summers and winters, it is just October which bears the brunt of this change. Taking a look at the average daily temperature of 13°C, we see a change of 3°C in the months on either side. Highs can reach a somewhat summery 16°C, while the lows drop to 10°C.

Rainfall also increases dramatically from the summer months, shooting up to 57mm and covering more than half the month at 16 days. This is not the only change that you will have to deal with: the hours of sunshine per day drops by 2 to 7. The sea temperature rests at 17°C, however, which means you can still go for a swim, if you're brave. This is certainly the most important time to keep an eye on the weather forecast, as there is really no telling which way the weather is going to go each day.