Historic Temperatures for 17th May in Puerto Rico

Puerto Rico is a holiday resort located on the southwestern coast of Gran Canaria in the Canary Islands, Spain not to be confused with the Commonwealth of Puerto Rico in the Caribbean. 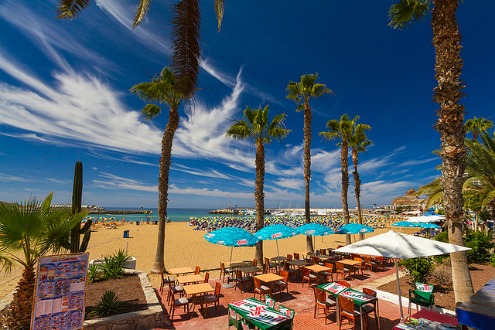 Enjoy a bite to eat at a beach side bar in Puerto Rico in Gran Canaria, Canary Islands, image taken by Ramon

The Canary Islands are nicknamed the 'Islands of Eternal Spring', due to their consistently pleasant climate all-year-round. While belonging to Spain, the islands actually sit off the northwest coast of Africa, near Morocco and the Western Sahara. The Canary Islands receive cooler temperatures than locations on the same latitude, thanks to the cooling, southwest Canary Current and the usual moderating effects of the sea.

Gran Canaria has a mountain range stretching from north to south, dividing the island in two. During the winter months January and February in particular the mountain peaks can be capped in a thin layer of snow which usually falls when winter rain storms affect the more coastal parts of the island.

Thanks to its extreme southerly location, Puerto Rico enjoys some of the best weather in Gran Canaria, with almost 3,000 hours of sunshine each year and hardly any rainfall at all. Generally, the resort is the hottest and sunniest in the Canary Islands, thanks to the barrier that the mountain range creates. This barrier traps the cool and humid winds on the north eastern side of the island, where clouds form and result in rain that the south western side doesn't receive.

Puerto Rico has a sub-tropical climate with just two seasons warm winters with very small quantities of rainfall and hot summers with no rainfall at all. Across the year, the temperature typically varies between 15°C and 27°C, rarely dropping below 13°C or rising above 30°C. However, when calimas affect the resort which they often do during the summer months temperatures can spike as high as 40°C.

February, November and December are the wettest months of the year, whilst June, July and August are the driest when rain usually never falls. And whilst the sea in most resorts in Canary Islands is too cold for swimming in for a few months in winter, Puerto Rico's extreme southerly location means that the sea is always warm enough for swimming in, regardless of which month you visit. 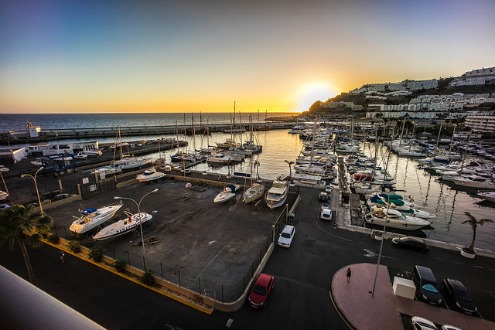 Watch the sun set at the marina in Puerto Rico in Gran Canaria, Canary Islands, image taken by Giuseppe

This record temperature was registered when the resort was subject to a calima. Whilst the Canary Islands are usually kept relatively mild thanks to the trade winds which blow in from the north east, a calima occurs when the winds change direction and blow in from an easterly direction. When they blow over this way, they cross over the Sahara Desert in North Africa first, bringing with them high temperatures up to 10°C hotter than normal and an intense concentration of dust and sand particles in the air which causes low visibility and a general discomfort for people with respiratory conditions.

When a calima occurs, there really isn't anything you can do but wait it out. Staying inside an air-conditioned building is the best way to avoid the heat and stifling conditions, but if you want to get out, head for the beach. The coastal areas are usually the least affected by calimas, since they're kept reasonably cool and clear by coastal breezes.

Hardly any rain falls at all during this season. May starts with an average rainfall of just 2mm over three days. This drops down to 0mm across June, July and August. The average rainfall rises up to 9mm across three days in September, peaking at 10mm in October when rain falls on an average of five days. During the first four months, drizzle is the most common form of rainfall, but this transitions into moderate rainfall across September and October.

Across summer, the sun beats down for an average of 11 hours each day. June and July are the sunniest months, with 12 average sunshine hours each day apiece. With so much sunshine, it's easy to get sunburnt or come down with heatstroke during your summer holiday in Puerto Rico. The best way to avoid these two is to wear plenty of suntan lotion, drink lots of water and avoid sunbathing during the hottest parts of the day between 11am and 3pm. 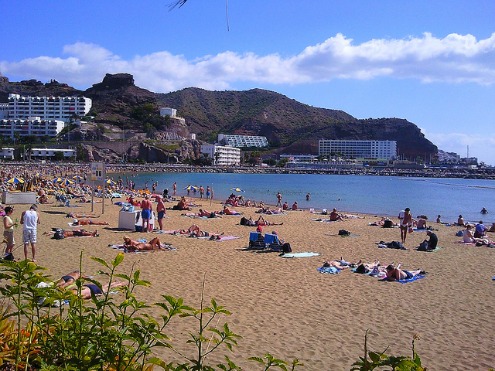 Soak up the sun at the beach in Puerto Rico in Gran Canaria, Canary Islands, image taken by Karen

Winter is classed as November to April in Puerto Rico and although it's relatively cool compared to the resort's summer season, it's much warmer than the rest of Europe is in winter. And because it's one of the hottest holiday destinations in Europe during this season, Puerto Rico is one of the most popular places for winter sun. The average temperature during this season is 18.5°C. Temperatures start out at a mild 21°C in November and get cooler from December until February. From March onward, temperatures begin to slowly climb, as the winter season merges into summer. The coldest temperature ever registered at the Gran Canaria Airport the closest weather station to Puerto Rico is 6.5°C, which was recorded on March 27th 1954.

Just like in the summer season, there is only a small difference between the daytime temperatures and the evening temperatures in Puerto Rico in winter. Average highs during the hottest part of the day range between 20°C and 23°C, whilst average lows range between 14°C and 18°C. Evenings in Puerto Rico can feel somewhat chilly especially if there is a breeze blowing in off the sea so you're best off bringing a pair of jeans and a jacket with you, just to make sure you keep warm after the sun sets.

Compared to the rest of the year, the winter season sees a significant amount of rainfall although it's not so wet that you should be put off from visiting the resort at this time of year. After a bone dry summer, the average monthly rainfall spikes up to 21mm in November and December, before it drops down to 17mm in January. February is the wettest month of the year with 22mm of rainfall, but after this month, the rainfall subsides down to 10mm on March and just 6mm in May.

Moderate rain is the most common type of precipitation you can expect to see at this time of year, which usually falls in short, heavy bursts. Despite Puerto Rico receiving moderate rain storms every winter, the resort is totally unprepared and when heavy rain falls, it usually results in flash flooding which can often cause roads to become inaccessible and closed down. However, since the resort is one of the sunniest in the Canary Islands, as soon as the rain has stopped falling, the sun usually comes out and dries up any puddles.

Although Puerto Rico enjoys significantly less sunshine during the winter season than it does in summer, the resort is still a lot sunnier than almost all other locations in Europe. In November, the number of daily sunshine hours drops down to nine and then down to an all-time low of eight by December. From January onward, the number of daily sunshine hours rises from nine, to ten to 11 by the end of the winter season. This creates an overall average of nine hours of sunshine each day in winter.