The latest and today's weather in Naples , Italy updated regularly

Naples is a large city that sits in the Bay of Naples in the south of Italy, around two hours from Rome. It is Italy's third largest city and one of the oldest. The city is most well-known for its proximity to Mt Vesuvius, its art and architecture which is rich in history and of course, its thin crust pizza!

Panorama of the port in the gulf of Naples

Many tourists visit Naples each year to enjoy the beautiful surroundings and pleasant southern Italian weather. Naples and the surrounding area enjoys a typical Mediterranean climate with long, hot and dry summers which are followed by mild, wet winters. Naples can thank the Mediterranean Sea, the protective curve of its bay and Italy's many mountains for its mild climate.

The city receives all four seasons with distinctly different attributes. Temperatures range hugely throughout the year, between 5°C and 30°C while rainfall varies between 30mm and 140mm per month! Despite this variation, there really is no bad time to visit Naples. While the impressive view of Mount Vesuvius across the bay is best on clear sunny days, the architecture is always impressive, the art always stunning and the pizza always delicious. 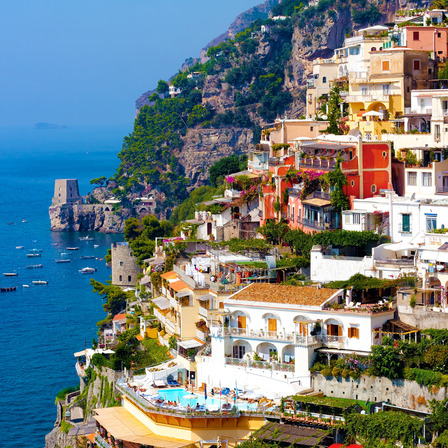 The summer season arrives in Naples in June and lasts through to September. At this time of year, the city gets blisteringly hot under the blazing sunshine. Low humidity and an almost constant sea breeze help to keep the temperature in check for most of the season, but in the peak months of July and August, it can get very hot. The average temperature is around 25°C in July and August, but highs can hit 30°C in the peak summer months, which some may find uncomfortable. It is advisable to have a siesta in the middle of the day to avoid the worst of the heat and the strongest, burning rays of the sunshine. Also, the warm sea temperatures of around 24°C will make a cooling swim very pleasant!

Some find June and September preferable to the middle of the season as their 26°C average high is more bearable. Night times usually cool off, on average getting under 20°C, but air-conditioning is still a must for a pleasant night's sleep.

Summer is also the sunniest time of the year in Naples, with clear blue skies and bright weather the norm. July and August see the most sunshine, with 10 hours every day.

Along with sunshine and high temperatures, the whole season is generally very dry, creating perfect holiday weather. June, July and August see just 30mm of rainfall and 4 wet days each, which usually consists of short showers which pass quickly. September sees a slight increase in rainfall, often in the form of thunderstorms, with 80mm throughout the month.

If you're looking for dry, sunny weather and don't mind hot temperatures, summer is a great time to visit Naples. However, the relentless heat can make it difficult to explore the attractions of the city fully and a slower pace may be required, with plenty of stops for shade and cool drinks. Spring and autumn are generally more suitable for an action-packed city break.

From October to November, autumn in Naples begins pleasantly but is decidedly a lead-up to winter. Conditions tend to worsen as the season progresses; the beginning of October is still incredibly pleasant whereas from mid-November, conditions are starting to turn cooler and wetter.

Average temperatures in October are still mild at 18°C with highs of 22°C, but drop into November, to an average of 13°C. Temperatures can get quite cool on an evening with seasonal lows of 8°C, so it is advisable to pack a jacket and some warmer layers to wear at night. The sea manages to stay above 20°C for most of the season though.

Sunshine levels reduce rather dramatically from summer to autumn, but there's still some to be seen, with between 4 and 6 hours of sun every day. The weather is sometimes overcast and changeable though, so holiday makers should check the weather forecast before they head out.

Autumn sees the wettest weather of the whole year in Naples, so visitors may experience some showers. Rainfall levels steadily increase throughout the season with 130mm of rain in October and November being the wettest month of the year, with 140mm. This averages at around 11 to 14 wet days per month.

While autumn can have some cooler and rainy days, it's still a pleasant time to visit the city. Lower temperatures make it easier to get around and less sunshine means you don't have to worry about getting burned as you explore the sights. 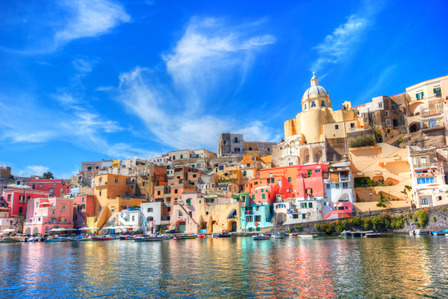 Naples on the Mediterranean Sea.

December to February is winter season in Naples, which sees the weather get cooler again. While it is not cold at all by northern hemisphere standards, it is quite cool and visitors at this time of year should not expect a sun, sea and sand holiday. The average temperature is around 10°C in December, falling to 9°C, while highs only reach 13°C throughout the season. Night times in Naples can get quite chilly; the average low temperature hovers around 5°C and frosts are not unknown as it can get down to freezing on an evening.

Rainfall lessens after the wet autumn period, though December and February still see 100mm of rain with slightly less in January. The sky remains overcast, with sunshine dwindling to three hours a day in darkest December and 4 days in January and February. Fog sometimes develops coming in off the bay and conditions are generally unpredictable. The sea is too cold for swimming for the whole of the season, with average sea temperatures between 14°C and 16°C.

While the weather isn't as advantageous as the summer months, Naples offers a great winter getaway from places like the UK which are experiencing freezing temperatures at this time of year. Travellers can take advantage of low hotel rates and can see the city without the crowds of tourists that flock there in peak season. Just make sure to pack sensibly to stay warm and dry.

After winter, Naples begins to gradually warm up through the spring months of March and April then leaps into summer-like conditions by May.

The average high temperature climbs to 16°C in March, a pleasant 18°C in April and a gorgeously warm 23°C in May while average temperatures are just slightly lower. Average low temperatures start out quite cool at the beginning of the season, at 7°C to 9°C, so you may need some warmer layers for evenings, however by May, temperatures hardly ever drop below 12°C.

The sun starts to come out for longer in spring, with between 5 and 8 hours of glorious sunshine a day, however the sea still remains cool at just 14°C to 19°C. While you may be able to hit the beach, it wouldn't be advised to swim in the sea until summer.

Rainfall lessens in Naples in spring and the weather seems to settle down as it approaches summer. March sees 80mm of rainfall, while there's only 60mm in May and 8 wet days on average. While there's still a chance of a shower, most days should be dry and clear.

With weather getting more and more enjoyable as the days pass, but temperatures not yet reaching their sizzling peak, spring is a good time to be in the city.