The latest and today's weather in Krabi , Thailand updated regularly

Krabi is humid and hot all year round, with average temperatures ranging between the late 20s and early 30s. Minor respite from the heat comes at night time, when average low temperatures often drop into the mid to low 20s, although the drop in temperature is often negated by a rise in humidity.

The dry season is the high season for tourism in Krabi and is when accommodation and flight prices will be at their highest. Whilst the wet season is the best time to visit the province if you're only interested in cheap flights, the high amount of rainfall will probably mean you'll be stuck inside your hotel room for most of your holiday, making your trip somewhat pointless.

The Krabi province is probably most well known for being the setting of 'The Beach', the 2000 film starting Leonardo Di Caprio. The film was shot on the island of Koh Phi Phi Le, centred on the stunning Maya Bay. Koh Phi Phi Le is the smaller sister island to Koh Phi Phi, which incidentally was the area worst hit by the 2004 Boxing Day tsunami, when the entire region suffered dramatic damage. The reconstruction effort has been quick and impressive but signs of damage are still visible in the worst hit areas. 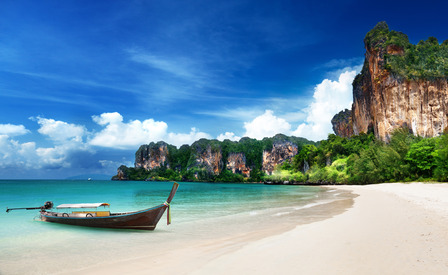 The dry season in Krabi is the busiest time of the year, with December and January being the peak months. This time of year is usually associated with intense crowding throughout the province and accommodation, food and transport costs being at their very highest. Over the course of the season, average highs and lows range from a pleasant 31°C/24°C in November, up to a slightly hotter 33°C/25°C by April.

November is one of the best months of the dry season to visit, when the temperatures are relatively low, the monsoon winds have considerably receded and the hectic crowds that December attracts have yet to arrive. However, November is also subject to the tail end of the wet season's rain storms and therefore receives an average of 153mm of rainfall, spread out between 12 wet days. At the other end of the scale, January is the driest month of the dry season, when a miniscule 15mm is received over three rainy days.

From December to February, Krabi is blessed with idyllic weather conditions: flat warm seas, clear skies with plenty of sunshine (an average of eight hours each day) and a refreshing sea breeze. By mid-January, the Christmas and New Year crowds tend to thin out, however, temperatures creep up from an average high of 32°C in November to 33-34°C in March and April. While humidity levels are relatively low, they are not low enough to make even the comparatively cool 30°C heat of November easy to acclimatise to. Humidity increases as the season progresses, exacerbating discomfort but not reaching the oppressive conditions of the wet season.

At 28-30°C, the average sea temperature for the period is bath-like as always. While it is still a refreshing break from sweltering heat, you won't get cold from staying in too long. The sea around the islands is remarkably clear and offers some incredible snorkelling and diving sites. This is the best time of year for these activities as underwater visibility distances are at their highest, making it easy to see all the colourful fish and tropical coral formations under the water's surface. This is due to the calmer waters and clear skies experienced by Krabi during the dry season. However, the uninterrupted sunshine also means the flourishing of plankton populations which can affect water clarity from around mid-March.

The entire rainy season sees periods of sunshine interrupted frequently by heavy downpours in Krabi. The average high temperature ranges between 32°C in May and 31°C in October during the daytime, with night time lows ranging from 25°C to 24°C. Rainfall is particularly intense in October, when the province is subject to an average rainfall of 270mm over 19 days, making it the wettest month of the year.

June see periods of phase one monsoon winds, rough seas and rain which makes it very difficult, if not impossible, to visit some of the outer islands. The strong winds die down in July and August when the weather becomes slightly clearer if you plan to travel to the area during the wet season, this is when to come. September brings phase two monsoon winds which ease come late October.

On the whole, the wet season is largely unpredictable in Krabi you are just as likely to be met with long periods of clear skies and sunny weather as you are with over a week of heavy rain and thick cloud. What is predictable is the soaring humidity that makes the heat very uncomfortable. If you are interested in jungle trekking, temple visits, diving or kayaking, visiting during this period should not be ruled out. While even these activities are somewhat hindered by high humidity and storms, they are less affected than beach-lounging.

Again, unpredictability is characteristic and if you're willing to take a gamble, you may find you are rewarded with seemingly endless sun-filled days. If you are lucky enough to have a prolonged period of sunshine, you may find yourself enjoying the utopian beaches in blissful solitude.

The plus-side of visiting Krabi during the rainy season is the same as any location during its low season there are fewer tourists and transport and accommodation are cheaper. The low season is seen as a time to experience a more 'authentic' Krabi as the locals are friendlier, the beaches are less crowded and the greenery and wildlife is abundant.

The rainforest is always bursting with vitality, but the heavy rains give rise to an accelerated period of growth and new life. In recent years, the Thailand Tourism Authority has been promoting the rainy season as the more appealing 'Green Season' in an attempt to spread tourism throughout the year rather than cramming all the visitors in between the more popular months of December to March. As the Thailand Tourism Authority's scheme takes effect, the benefits of travelling in the low season are diminishing.

The monsoon winds are the main determinant of Krabi's climate as the speed and direction of the winds affect the temperature, rainfall and cloud cover of each region. The north-eastern monsoon winds affect the region from December through until March. The north-easterly winds create dry air streams which results in tranquil clear blue skies. When the Monsoon winds change directions cooler temperatures and showers occur, this is generally around June and September.

Many tourists have been scared away from the region by the aftermath of the 2004 Boxing Day tsunami. The region has since been rehabilitated, helped by the $7 billion in aid and donations that were received. Tsunamis are caused by underwater earthquakes displacing overlying water, sending waves across the ocean that build in size and momentum, causing catastrophic damage if they reach the coast. The earthquake that caused the 2004 tsunami was the second largest ever recorded in the region.