The latest and today's weather in fuengirola , Spain updated regularly

Located within Malaga along the Costa del Sol in the south of Spain, Fuengirola is a coastal resort which boasts more than 7km of beaches, several golf courses, contemporary tapas bars and several historical ruins. This area started off life as a small, quiet fishing village, but it developed into a leading tourist centre in the 1960s, visited by thousands of European tourists each year. Today, the resort is largely urban with many high-rise apartment blocks close to the seafront, commercial centres and a modern harbour lined by bars, restaurants, cafes and nightclubs.

Fuengirola enjoys a typical Mediterranean climate, with dry, hot summers and mild, rainy winters. Over the course of the year, the temperature typically varies between 8°C and 31°C, rarely dropping below 4°C or rising above 35°C. When heatwaves affect the resort during the summer season, temperatures can rise as high as the mid-40s, although this is somewhat of a rare occurrence and only lasts for a couple of days, maximum.

The most popular time of year to visit Fuengirola is between May and September, when temperatures are at their highest and precipitation is at its lowest. Thanks to its coastal location, Fuengirola has a more moderate and stable climate than places further inland. The sea breeze which regularly blows in off the coast helps keep the temperatures down in summer, although it can make winter evenings feel particularly cold. At the other end of the scale, the resort's southerly location means that it enjoys some of the highest temperatures and sunshine hours in the whole of Spain all-year-round.

Winters in Fuengirola are remarkably mild and much warmer than many other locations further north, which makes the resort a very popular destination for people searching for some winter sun. However, temperatures drop dramatically as soon as the sun sets, so be prepared for some chilly nights. During spring and autumn, the weather can be unpredictable even if the sun is shining, rain clouds can quickly appear and result in short, heavy downpours. Although the weather is rather pleasant daytimes are generally warm, although evenings are on the cool side. 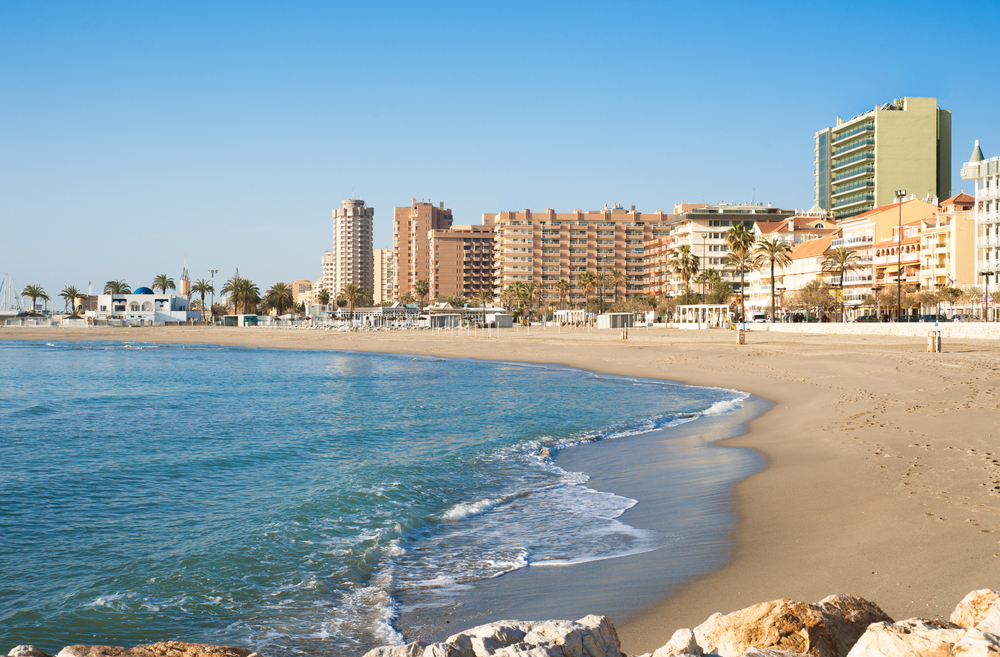 Don't forget to hit the beach during your holiday in Fuengirola, Spain

Most people choose to visit Fuengirola in the summer (May-September), when clear blue skies and plenty of sunshine are practically guaranteed every day. During this season, the average temperature for the resort is 22°C. The season starts off quite cool at just 18°C, but by July and August, average temperatures peak at 24°C. There is a huge difference between the daytime and evening temperatures around 10°C, usually. Average highs recorded during the hottest part of the day range between 23°C and 29°C, whilst average lows recorded during the coldest part of the night range between 13°C and 19°C.

Average high temperatures are particularly hot in July and August, so much so that some travellers might find the heat too much. If this is the case, you're better off visiting in May, June or September, when the heat is a bit more subdued. However, thanks to the significant difference between average high and low temperatures, you can always rely on the evenings to bring with them some relief from the heat. What's more, Fuengirola's low humidity can also make temperatures feel more pleasant and slightly cooler than they actually are.

As you'd expect for summer in Spain, rainfall is barely worth mentioning. May kicks off the season with 23mm of rainfall over eight days and precipitation continues to drop until it reaches just 2mm over two days in July the driest month of the year. After this, rainfall slowly starts to creep back up as summer merges into autumn. In May and June, the most common type of precipitation you can expect to see are moderate rain, although showers are usually short and heavy not like the lengthy spells of drizzle you get in the UK. However, for the rest of the summer season, you're more likely to see thunderstorms than you are moderate rain.

Fuengirola sees a huge amount of sunshine in summer, with an average of 12 daily hours of sunshine across the season. July, with 14 hours of sunshine every day, is the sunniest month, although the sky can often appear hazy in summer, due to the fog which rolls in off the coast. However, this fog usually only appears for a couple of hours some mornings and you shouldn't let it put you off visiting Fuengirola at this time of year.

With so much sunshine to enjoy, summer is a great month to hit the beach in Fuengirola. At this time of year, the average sea temperature is a warm 22°C. Generally, anything above 18°C is considered warm enough for swimming in this is the average sea temperature of May, which means that some travellers might find the sea too cold during this month. However, by August, the sea is 24°C the hottest it gets which practically everyone will find sufficiently warm.

Enjoy a stroll through the resort at night in Fuengirola, Spain

Autumn October and November is unpredictable, in terms of weather, with huge discrepancies between one day and the next. The average temperature starts off at 22°C in October and drops down to 18°C in November, making it the perfect time for holidaymakers who aren't big fans of high temperatures to visit. These averages are created by average highs of 22°C and 18°C and average lows of 14°C and 10°C, respectively. Although temperatures can drop as low as freezing point during particularly cold spells making winter warmer clothes essential, they can also rise into the mid-20s, which means you'll be comfortable in little more than beachwear. In order to be prepared for everything, you're best off taking a vast assortment of clothing so you're comfortable whatever the weather.

Precipitation increases rapidly during this season, as summer is left behind and winter is embraced. October sees an average of 55mm of rain which falls over nine days, but November sees a staggering 115mm across 11 days, making it the wettest month of the year. With rain falling on around 1/3 of the season, there's a very good chance you'll get a rainy spell or two at this time of year, so be prepared. Moderate rain and thunderstorms are the most common forms of precipitation you'll see at this time of year, both of which can go on for days.

After a very sunny summer, the number of daily sunshine hours drops dramatically in autumn. October sees an average of nine daily hours of sunshine each day, whilst November sees eight. So even though the temperatures have cooled down, you'll still get plenty of chances to sunbathe during your autumn holiday in Fuengirola.

The sea retains a lot of the heat from summer into autumn. In October, the average sea temperature is 21°C which almost everyone will find more than warm enough for swimming in whilst the sea in November is a comparatively cool 18°C, which some people might find too cold for swimming. 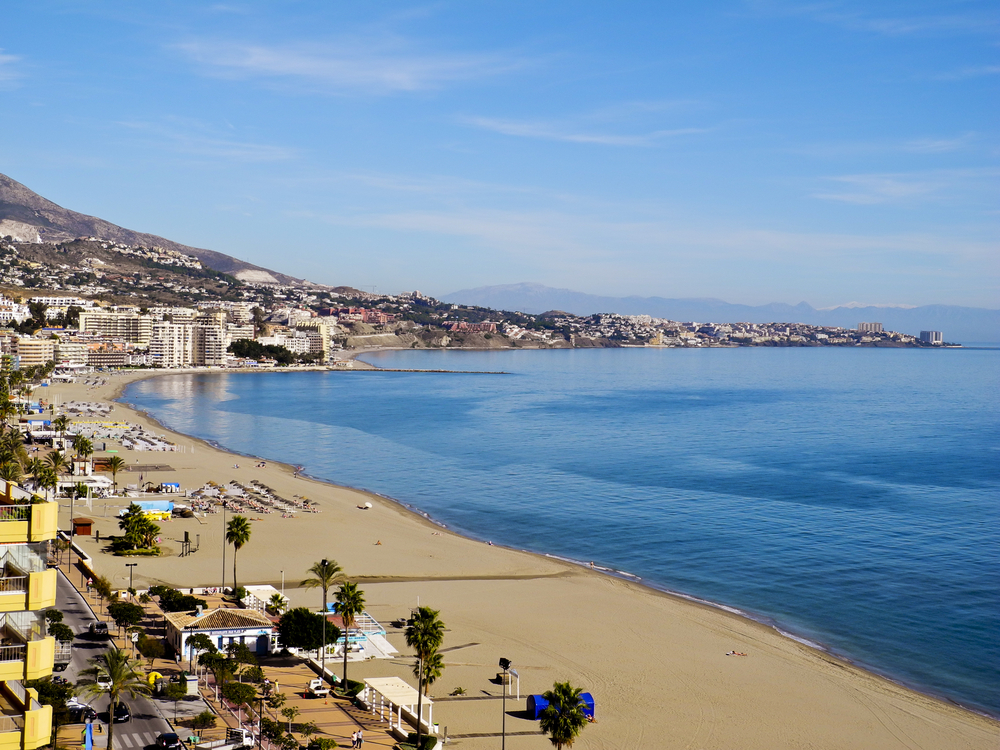 The sea is almost always calm enough for swimming in Fuengirola, Spain

Winter (December, January and February) is the coldest season in Fuengirola, although it's still very warm compared to many other European locations further north. At this time of year, the average temperature is 12°C, created by average highs of 15°C-16°C and average lows of 6°C-8°C. January is the coldest month of the year, so plan to visit at another time if you want guaranteed sunshine and warm temperatures. Regardless of which month you go, winter temperatures in Fuengirola can sometimes hit the 20°C mark or almost fall as low as freezing point, so be prepared and pack accordingly. These temperatures can often feel even cooler than they actually are, due to the resort's low humidity and the breeze which blows in off the sea.

As well as being the coldest, winter is also the wettest season, when heavy rainstorms can last for prolonged periods sometimes days at a time. After peaking in November, the quantity of precipitation gradually decreases across the season, down to 98mm in December, 83mm in January and 75mm in February. However, despite the lessening rain, precipitation falls on an average of 1/3 of days across the season, which means you're practically guaranteed to get some of the wet stuff during your winter holiday in Fuengirola.

Compared to the rest of the year, the resort sees very little sunshine in winter. December is the least sunny month of the year, when the sun shines for just six hours a day. However, this figure jumps up slightly to seven hours a day in January and February. This data translates into a mixture of overcast spells and sunny hours each day in Fuengirola rarely will you get an entire day with solely clear or cloudy skies. Due to the low temperatures and chance of cloud, winter won't be a good time for sunbathing and with a cold average sea temperature of 16°C, the sea won't be any good for swimming in, either. 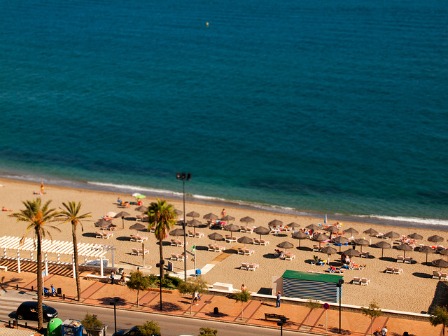 Spend a day at one of the many golden beaches in Fuengirola, Spain, image taken by Kevin