As you would expect from a made-to-measure destination, Port El Kantaoui in Tunisia is a well thought out resort, paying homage to the traditional feel of a Spanish village. The sense of order and design are readily observed, with the beach being split into two distinct areas, either side of a 340-berth purpose built marina and quay. The southern side of the marina is a popular sun spot, adorned with sun loungers and parasols, whilst the northern end houses a line of immaculately presented hotel accommodation

Due to its geographical position, the north of the Tunisian Dorsal benefits from a climate with both Mediterranean and hot semi-arid characteristics, with long hot summers and short mild winters, with an average of 299 days of sunshine per year.

Summer in Port El Kantaoui lasts from April through to September. Of the summer months, April and May provide the most forgiving temperatures, with day times averaging in the mid-20s, although the sea water temperature is still catching up after the cool winter. The nights cool down considerably to around 12ºC in April and 15ºC in May. Rain is still a possibility during these months, but not very likely. The height of the summer sees an average day time temperature of 30ºC and it can push up into the 40s. From June till September the heat can be piercing, making shaded areas a priority.

The hottest day ever recorded in the Port fell on 29 August 2007, when temperatures as high as 48°C were registered.

Winter lasts from October till March. In the fringes of the season in March, October and November, temperatures still reach into the 20s. The average day time high temperature drops from 26ºC in October to 21ºC in November and 16ºC in January, then back up to 19ºC in March. Evenings can be chilly after October, often below 10ºC, with January receiving a night time average low of 7ºC. October and November temperatures may seem attractive but throughout the winter rain is frequent, often prolonged. The coolest day ever recorded in the Port fell on 27 December 1993, when temperatures as low as 0°C were registered.

Much of Tunisia is arid desert; the Sahara stretches well into the south side of the country. Dramatic temperature differences from day to night, long droughts interspersed with seasonal downpours, and a cruel, relentless sun are characteristic of the desert, which heavily influences the land around it. Much of Tunisia is arid and subject to the scorching Sirocco wind from the desert. Only eighteen percent of the country has arable land. The mountains of the north provide the south with shelter from the hottest weather, and the Mediterranean Sea cools the southern coast where Port El Kantaoui is situated.

Although famed for its extremes of heat, with temperatures as high as 48°C, Port El Kantaoui is also subject to its fair share of storm conditions. If you are visiting in September you have the most chance of encountering freak weather, with the second of September having the highest chance at 32.1%. Naturally most guests will opt to view the storm from the relative safety of their hotels, with beachfront conditions becoming extremely hazardous. Record wind speeds were recorded at 49.9 knots on 27 February 1999 (classed as a storm or 'whole gale' on the Beaufort wind force scale). 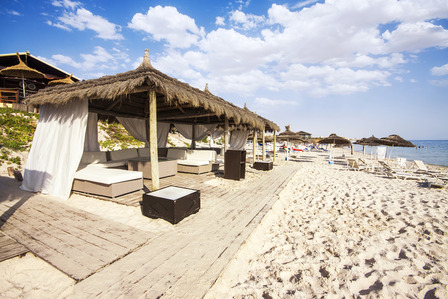