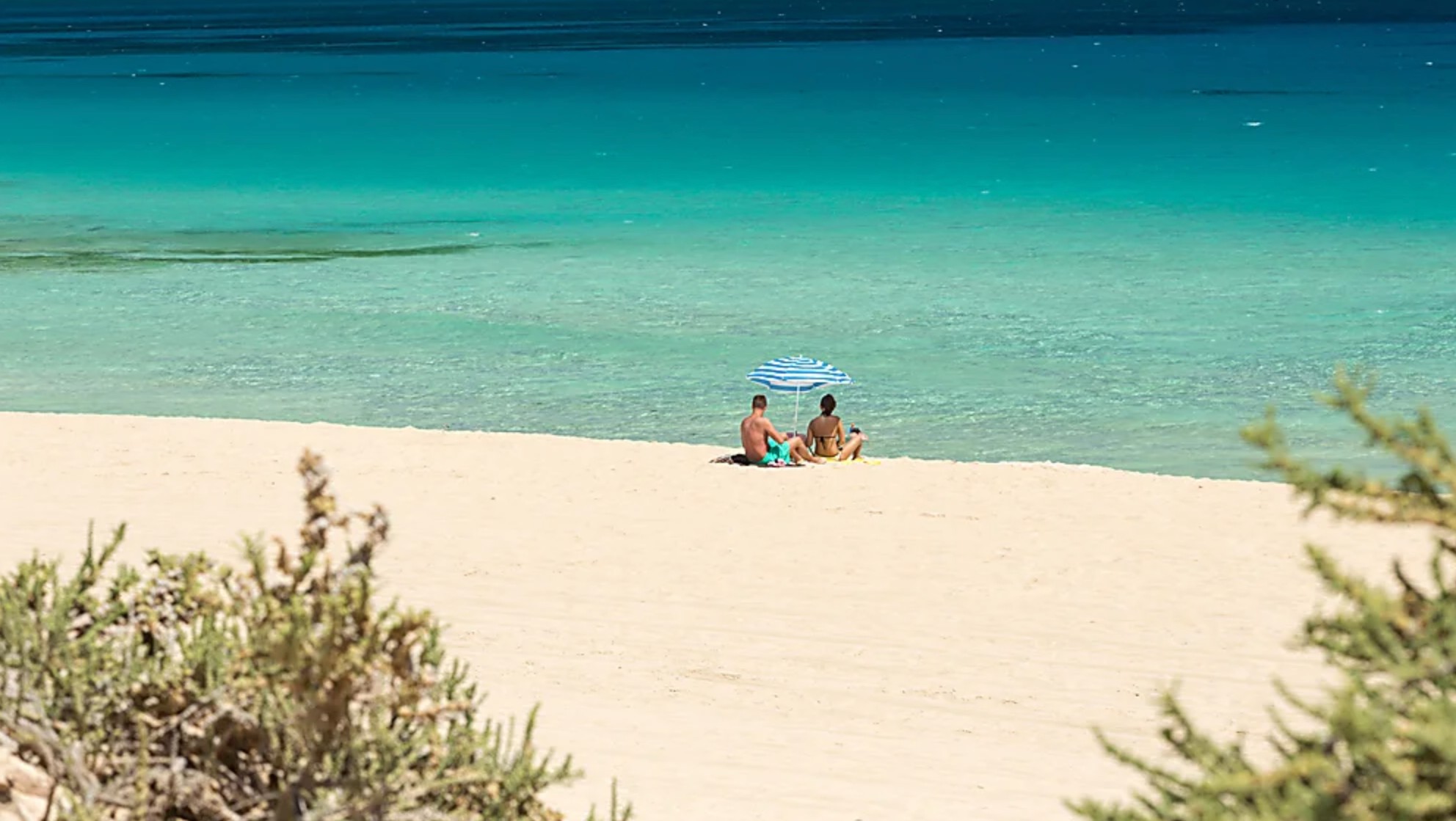 Whether you are a water sports champion, a tanning queen, or an unashamed foodie – Fuerteventura has something for you.

Fuerteventura in the Canary Islands seems to be made mostly of beach, stretching out for miles like a golden motorway next to sapphire blue seas. Its volcanic interior is an otherworldly mix of endless dunes and contorted rock formations that look like they’ve been melted and poured from the sky.

But best of all, the weather is always good. Not only does it enjoy 3000 hours of sunlight every year, but its location – only 100km from Africa and on the same latitude as Florida – ensures that the weather stays good all year round: right now it is sitting happily in the mid-20s.

Fuerteventura provides stunning beaches replete with golden sands, spectacular views, and crystal waters. This is why people return to time and time again, to lounge on beaches in glorious sunshine and forget their woes. Although it’s only 98km long the Spanish province has 150 beaches, so it’s sometimes hard to know where to start.

Local busses will help you wander from the beach to beach, but for those more remote locations, it may be worth renting a car.

The beaches around the outpost town of El Cotillo on the west coast are beautiful and close to amenities: fill up a glass of wine and enjoy the sunset while looking out upon an endless expanse of blue.

Playa de Sotavento and Cofete beach, both in the southern tail of the island, are wonderfully peaceful. For those who prefer a bit more hustle and bustle, try Flag Beach near Corralejo or Playa Blanca by Puerto Del Rosario.

Fuerteventura – literally translated as “strong winds” – is famous for its board sports, and many flocks every year to exploit its gusty mornings. Although the International Windsurfing and Kiteboarding Championship has been held annually since 1985, beginners are always welcome, try NaturalSense Kite School or René Egli Fuerteventura Windsurfing for lessons.

When the winds die down it is also a great location for surfing, especially on the west coast where perfect waves roll in like lines on a page.

The rough volcanic makeup of Fuerteventura’s interior is not conducive to plant life, giving the island its unique baron beauty. Scattered around the island, however, are endless fields of spikey aloe vera plants, a surreal sight when you chance upon them.

This wonder plant, which was lauded by both Alexander the Great and Cleopatra, grows in great reams across the island – against all odds.

Close to Caleta de Fuste is Fuetventura’s salt museum – a homage to the salinas (salt mines) that used to dot the island. This is the last working example left of a practice that stretches back to the mid-19th century. Look outside to see ivory mountains of salt gleaming under the African sun – a superb sight.

Tour the island built by volcanoes 🌋

Rent a car and while away a day cruising around the islands sweeping roads. Fuerteventura is all vibrant volcanic rocks and windswept sand plains, with historic towns, lighthouses, and windmills liberally interspersed. And best of all, there are so few roads across the sparsely populated island that it’s almost impossible to get lost.

The Las Peñitas view-point in Betancuria National Park on the west coast, just past the oldest village in the Canaries, is unforgettable. Landrover tours are popular and permit access to some of the less accessible locations.

The air conditioning isn’t as good but the views are worth it Join a group riding tour across dunes to places cars can’t go or wander through the lapping swell on an empty, forgotten beach. Empty roads and purpose-built tracks also make Fuerteventura a haven for road cyclists.

Early settlers believed the mountain of Tindaya to be sacred; and when you approach you’ll see why, as its 401m bulk rises out of the surrounding foothills like an island in the ocean.

Strange carvings of feet litter the top, all pointing west to some unknown point – the reason they are here and what they mean remains a mystery to scientists.

From the top views are spectacular – on a good day you will be able to see Teide, the highest mountain in Tenerife.

The fish around Fuerteventura aren’t just good to eat. Its location in the Atlantic, yet close to the Mediterranean, means the waters are teeming with life including pelagic, tropical, and temperate, which are great for snorkeling or scuba diving.

Wear a wet suit though, due to the cold Canary current the water is chillier than you might think.

The golden dunes around Corralejo and El Cotillo in the north and Jandia in the south are so expansive that even the shyest naturist should be able to find a discreet spot to get that elusive all-over tan.