The latest and today's weather in Negril , Jamaica updated regularly

Negril is a small and laidback town situated in the most western point of Jamaica in the Caribbean, about 80km from Montego Bay. The resort is well known for its miles of beautiful white sandy beaches and shallow bays with clear blue waters and hotels that offer easy access to the beach. The town is also home to many beach-side bars and restaurants where visitors can enjoy a drink and listen to some reggae music.

The weather in Negril offers an ideal vacation for tourists visiting the island of "great sun-tan and warm seas". Negril benefits from some of the Caribbean's most pleasing weather; a wonderful, warm climate with year-round sunshine and striking balmy nights. The climate is tropical with constant warm to hot temperatures all year round and occasional light showers that can at times make the days seem quite humid. Negril's average climate stay generally comparable throughout the entire year.

Temperatures throughout the winter season average around 25°C while during the summer months temperatures linger around 27°C. Negril's average high temperatures rarely exceed 30°C and humidity will not often go beyond 70%. Negril's temperatures are also tempered by lovely sea breezes; there is constantly a gentle breeze blowing that will cool things down. These breezes also make the region ideal for water sports, such as windsurfing and paragliding, particularly during the winter months. Scuba diving is also extremely popular, with excellent facilities all around the island and many licensed operators. The extensive coastline and miles of beautiful crystal clear Caribbean waters give the opportunities to see wrecks, coral reefs swarming with marine life. With an average year-round sea temperature of 27°C, Negril is an underwater paradise for anyone with a snorkel. 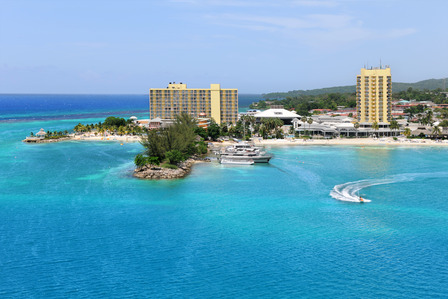 Broadly speaking, the best time to visit Negril is during the winter season which runs from December to April. Though temperatures and sunshine are very similar year round, this time of the year is the dry season which provides perfect conditions for visiting the beach without running much risk of being caught in a downpour. It's also a great time to escape the cold and wet weather back home, if you're from the UK and other European destinations.

January and February are the driest months of the year with 49mm of rainfall each which falls over 6 to 8 days on average. Rainfall increases slightly in March to 71mm and again in April to 107mm, as the wet season arrives.

Sea temperatures also remain consistent throughout the year, though they are slightly cooler in winter. At an average temperature of 27°C, it still feels beautifully warm and bath-like perfect if you want to go for a swim in the clear blue ocean.  There's also plenty of sunshine to soak up at the beach, with 9 to 10 hours of sun daily.

If you're looking for guaranteed sunshine and dry weather, it is recommended to visit Negril between December and April. However, the town will be busy with tourists at this time of year and it is peak season so prices will be higher.

Summer in Negril is between May and November though it is more commonly classed as the wet season. As a result, summer is the easiest time to find cheap holidays in Negril and the town will be much quieter with less tourists around the beaches and pools. Don't be fooled into thinking that the weather will be awful at this time of the year through the summer weather in Negril is very pleasant with plenty of sunshine, but there is more rainfall than the dry season.

Rainfall peaks at the beginning of the season in May, and then again at the end of the season in October. May sees 205mm of rain and 11 wet days while October is the wettest month with 222mm and 16 wet days. The months in between average at around 180mm and 13 wet days. This may sound a lot, but visitors shouldn't be totally put off. Cloudless, pleasant days are very frequent at any time of year as rainfall usually occurs in short heavy downpours and passes quickly. Rain mostly takes place in soft, soothing showers in the early evenings and can actually bring some relief from the hot temperatures and humidity.

Despite an increase in rain, there's plenty of sunshine for visitors to enjoy this season. July is the sunniest month with 11 hours a day while the other months have around 10 bright and sunny hours.

May to November sees the temperatures rise slightly from the previous months, with an average of 27°C every month. High temperatures are also consistent, between 29°C and 30°C while highs never drop below 24°C, even at night. This can feel very hot to some holiday makers and it is recommended that travellers take care in the heat, drinking plenty of water and staying in the shade where possible. Visitors can also seek relief in their hotel pool or cool down in the sea, which feels lovely at 27°C. The sea breezes should also help to cool things down.

One thing that holiday makers should be aware of is that Jamaica's hurricane season fall between June and November. Hurricanes don't always occur but can happen at any time during the season, particularly in August and September. While this may worry some visitors, weather forecasts for the region will give adequate warning so that precautions can be taken. If you want to avoid hurricanes, it may be best to visit Negril earlier in the season when hurricanes are not as common, but if you are visiting during this season check the forecast.