Located in the Rayong province, just to the south east of Bangkok; Ko Samet is a striking island off the southern coast of Thailand. With a year round tropical climate; this island promises to impress visitors all year round. The climate is generally warm and humid at all times throughout the year and the region will typically experience a profuse amount of rainfall. The typical climate of Ko Samet is very enjoyable throughout the year as temperatures vary anywhere from 25ºC to 34ºC. The type of weather through the island can be separated into three very diverse seasons; the warm season lasting from March until August, a rainy season, from September until November and the still warm but cooler season which extends from December until February. Although located only a few kilometers offshore the Rayong Province, Ko Samet obtains considerably less rainfall than that on the mainland. Being the driest archipelago in Thailand, Ko Samet experiences its own unique microclimate and gives gratifying access to visitors all year through. 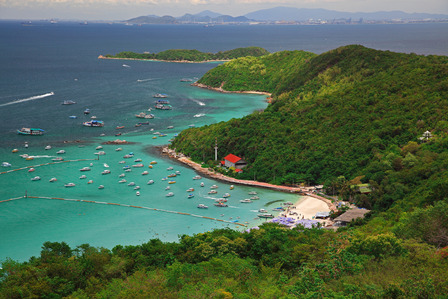 From the months of March until August the climate is assured to always be hot and dry! This is particularly an ideal time of the year for people who are fond lovers of intense heat and can handle average temperatures between 30ºC to 35ºC, on occasions, even higher. July through to September will commonly see frequent showers; however these will rarely last more than one or two minutes and will generally bring relief to a hot day in the scorching sun.

Between the months of September to November Ko Samet features its monsoon season, or otherwise known as its rainy season. Throughout this period the island will experience still very hot and steamy weather and the sun will guaranteed to still be shining for the majority of the time. Even though showers are frequent they are brisk and very short lived, coming in a more tropical form. The rainy season will commonly see stimulating short downpours, rapidly followed by warm sunshine.

The months between December and February, the island experiences its dry season. There is very little rain throughout this period, yet a soothing ocean breeze is always present, which is idyllic given the everlasting year round sunshine and hot climates. In general, it doesn't matter what time of the year you choose to visit Ko Samet as the year round tropical climate is everlasting. Even though the humidity can at times bring discomfort, the pleasing coastal breezes are assured to make your stay more enjoyable.