Situated approximately forty minutes south of Brisbane in South East Queensland; the Gold Coast is renowned as Australia's most popular tourist destination. Home to the famous location of "Surfers Paradise", four of the worlds most favourable theme parks and a gorgeous coastline extending for more than 900km including some of Australia's most beautiful beaches; the Gold Coast is an ideal holiday for a group of friends or the family. With an average of over 300 days of sunshine each year and temperatures that promise to impress; the Gold Coast assures an enjoyable vacation, all year round. The Gold Coast will typically feature a subtropical climate, meaning hot, humid summers and mild, pleasant winters. With endless amounts of tourist activities and temperatures during the winter months that still reach as high as 22ºC, it's no wonder the Gold Coast is Australia's most desired holiday hotspot. The beaches throughout the coastline will commonly see many locals and visitors lazing around, achieving a golden tan. Therefore plenty of beachwear is necessary, as it is also a good idea to pack a light jacket if you want to explore the beautiful hinterland surroundings of the coast. Always remember to bring a pair of sunglasses and a hat, not matter what time of the year you choose to travel.

Summer is the Gold Coast's most favourable time of the year, with thousands of tourists from around the world and Australia packing their bags to enjoy the assured hot temperatures. Temperatures will generally range between 25ºC to 32ºC throughout January and February and will only dip slightly towards March and April. Humidity throughout this time is very high, which can create an uncomfortable stickiness to the air, especially at night time. Short but violent storms are also common during the summertime, obtaining the majority of the yearly rainfall throughout this time. Even though storms are very frequent during the summer months, the Gold Coast lies outside of the cyclone and monsoon zone that is common for the more northern areas of Queensland. 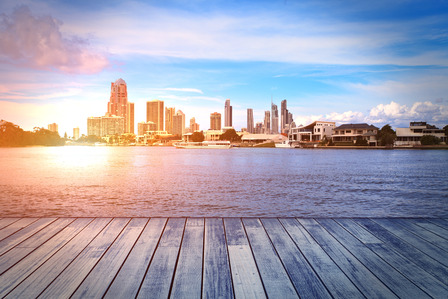 Unlike the northern hemisphere; autumn takes place from March until May. This is also a very pleasant time of the year if you want to escape the hot humidity of the summer months. Easter break is a very popular holiday throughout the Gold Coast as the region will see many visitors soaking up the last rays of the high climates. Temperatures during this time will average between 19ºC to 25ºC, and although thunderstorms are not as frequent, rainfall will be at its highest averaging at 200mm in March.

Although winter can at times feel chilly because of the surrounding coastal breeze of the South Pacific Ocean, it is very mild in comparison to the freezing climates typical of Europe. Winter temperatures in the Gold Coast will very rarely drop below 10ºC and will commonly reach 20ºC or higher towards the end of August. Because this also the driest time of the year, many residents and visitors wanting to getaway from the cooler temperatures down south, will be seen lying on the beaches enjoying the warm sunshine.

Spring; similar to autumn is very pleasant time of the year to visit, as the surrounding air is fresh and temperatures are very enjoyable. Climates will noticeably climb higher from September through until November, and a brisk shower is always a pleasant way to lower the hot afternoon temperatures.