The latest and today's weather in Dahab , Egypt updated regularly

Dahab has a desert climate with high temperatures, minimal rainfall and plenty of sunshine year round. The annual climate can be split into outrageously hot summers and winters with hot days and chilly nights. The transition periods between summer and winter in March and April, October and November, are generally considered the best times to visit the area as the days do not reach unbearably high temperatures and night times are not too cool.

In the summer months Dahab sees the average high temperature climb through the 30s. It gets to 30°C in April, 34°C in May then stays in the high 30s from June till September, peaking in July at 38°C, and gets back down to 31°C in October. These averages mean that it can get into the mid 40s which could never be called comfortable. Night time temperatures are considerably cooler but still unreasonably hot. It generally gets into the mid 20s but in the peak months of July and August it can stay up around 30°C.

Clouds neglect Dahab for the entire summer season. A drought can be expected for the whole period and sunshine levels are exceptionally high. Ten hours of sunshine or more are likely each day throughout the season, peaking in June and July at thirteen hours per day on average. Much more likely than rainstorms are sandstorms; the khamsin wind from the southwest, originating in the Sahara, can become incredibly strong, whipping up violent sandstorms that blot out the sky, bring all transport to a standstill and keep you indoors. The khamsin is strongest at the beginning of the season, though sandstorms can occur at any time throughout the year.

The soaring heat may sound rather uncomfortable and it is certainly not to be considered as your average beach weather. The risks of sunburn, sunstroke and dehydration are high and it is often advisable not to spend long exposed to the sun, especially in the peak of the day. However, there are a number of factors which help to make these summers bearable. Low humidity lowers the perceived temperature and the northern prevailing winds provide a slight but steady relief. The Gulf waters also provide a source of refreshment. The water temperature gets up to 28°C in the peak of the season and this is considered the best time to visit the area for diving the balmy water means you'll never have to get out to warm up.

In winter the temperature quickly becomes more reasonable. The average high temperature drops to 27°C in November then works its way down to its lowest point of 22°C in January before creeping back to 25°C in March. Night time temperatures drop by about the same amount as they do in the summer, but as the starting point is lower it is much more noticeable. In November it is still quite hot at night but in December the average low temperature is 15°C and in January it is 13°C, after which it gets warmer again, getting up to 16°C in March. It can drop below 10°C but it rarely gets down to freezing along the coast. Further inland subzero temperatures are not uncommon at night. The days are pleasantly hot but the nights certainly require an extra layer or so.

Rainfall does increase slightly during the winter but it is highly unpredictable. One or two storms can be expected each month. These are heavy but brief. The dry soil and shifting sands are unable to cope with any amount of water; it slips right through cracks or down into the sand, or sits on top of hard-baked earth to be evaporated by the intense sun. It is often overcast or hazy during the winter but even at its cloudiest, in December and January, Dahab still sees around eight hours of sunshine per day. Sandstorms are most likely at the end of the month. 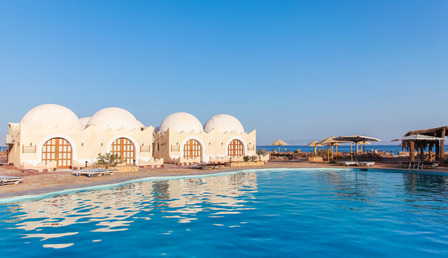 The resort sits on the eastern side of Egypt's Sinai Peninsula on the Gulf of Aqaba. While the presence of water usually helps to keep temperatures in check, the Gulf is very small, not large enough to have a profound effect on the large expanse of desert all around, and towns on the banks still see extreme temperatures. Resorts closer to the Red Sea and further from the equator, to the south, see slightly more moderate summers than those to the north. Dahab, sitting around the middle, is a few degrees hotter than resorts in Sharm el Sheikh but a few degrees cooler than Taba and Aqaba in the summer.