Boa Vista is the easternmost island in Cape Verde, positioned in the Atlantic Ocean. The island, whose name means "good view" in English, is known for its beaches and sand dunes, as well as the native marine turtles and traditional folk music that attract thousands of visitors each year.

This is the third largest island of Cape Verde, after Santa Antão and Santiago, and is positioned 455 kilometres off the western coast of Africa. Most of the island is flat, although there are a couple of mountainous points, including Monte Estância which is the highest peak in Boa Vista, at 387 metres.

The island enjoys a tropical climate with great weather, high temperatures and fairly low rainfall throughout the year. The wet season usually takes place between September and October, but even then the island experiences just a small amount of rainfall, with merely 24mm of precipitation recorded in each of those two months. 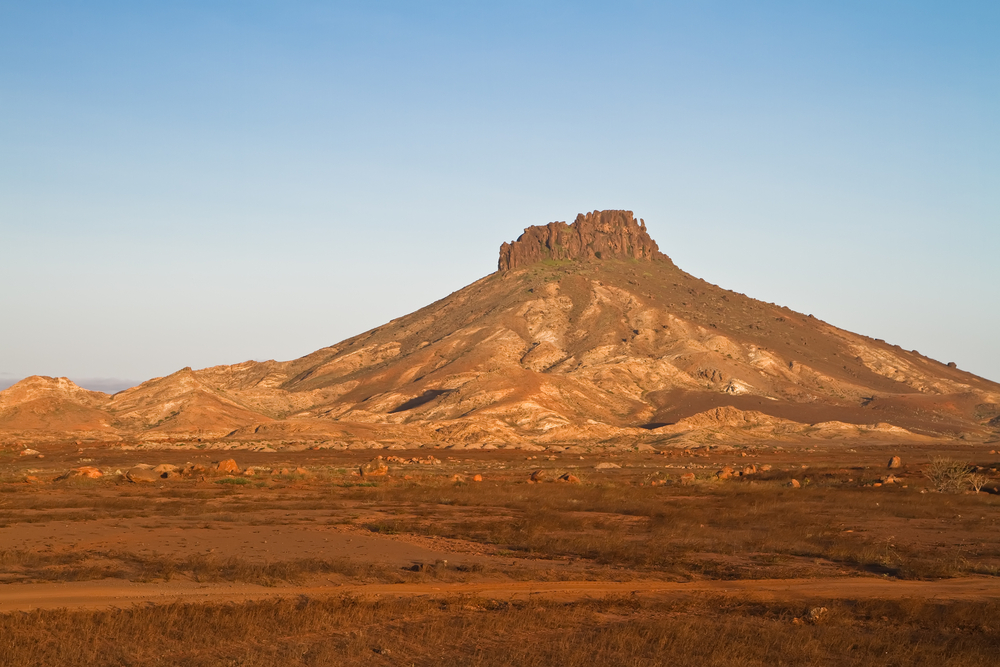 The days in April and May start out comfortably at 20°C in the early morning and rise to 26-27°C in the afternoon. The respective daily average temperatures for those months are 23°C and 24°C, which are incredibly comfortable, particularly when compared with other popular destinations in the Northern Hemisphere at this time of year. The temperature of the Atlantic Ocean is relatively constantead: high all year roundn this region and averages 22°C in spring.

Sunlight hours reach their annual peak at an average of 10 hours daily in April and May. This is due to the prevailing winds from Africa preventing the formation of clouds during this time. In March and June, there are 9 hours of sunshine per day.

When it comes to rainfall, spring is the driest season of them all, as a result of those extremely clear skies at this time of year. Each spring month has merely one day with rainfall on average and the total amount of rainfall is hardly any higher than 9mm in May which is virtually nothing. April and June see even less, averaging only 1mm across each month!

Summer on Boa Vista is not the single warmest time of the year, in contrary to most other places in the Northern Hemisphere, but visitors to the island will experience a warming trend that lasts through until autumn, which is in fact also very, very warm. The days in June start with lows averaging 22°C and highs around 28°C. This temperature range is maintained during July. The overall average temperatures reach heights of up to 27°C in summer.

June is one of the driest months of the year with an average of 1mm of rainfall for the entire month and barely one day with precipitation. July and August receive significantly more rain, with an average of 12 to 13mm, but this small amount usually falls during one or two brief storms, leaving visitors a chance to enjoy the island without worrying about inclement weather. Boa Vista is a pretty dry destination all year round, and summer is absolutely no exception.

Surprisingly, the summer season is the least sunny time of year in Cape Verde. July and August have "only" 7 and 6 hours of sunshine per day respectively.

The temperature of the Atlantic Ocean does reach its annual maximum in (late) summer. In August, the sea temperature averages 26°C and in September, it reaches that yearly maximum of 27°C, which is definitely a pleasant temperature for swimming. 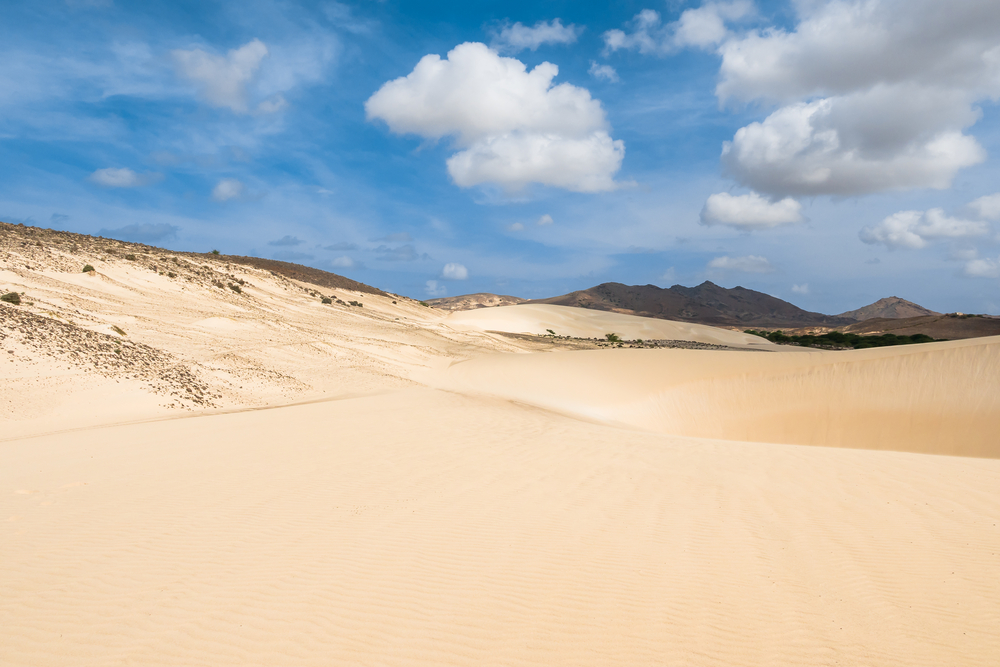 Autumn is the wettest time of the year. This is when Boa Vista feels like a warm, tropical spot. From August through October, temperatures start in the morning around 24°C and rise to 30°C in the afternoon. A sea breeze begins to blow from the late morning through evening to keep Boa Vista comfortable despite the warm temperatures. Both September and October experience 24mm of rain, but this rain falls over a short period of time in brief cloudbursts.

September only has four wet days in the whole month, on average, and October only has two rainy days. The total amount of rainfall in those two months is 24mm per month, which isn't particularly high at all.

In terms of sunshine, autumn gets about 7 to 8 hours of sunshine per day on average, which combined with those comfortable temperatures makes it a perfect destination for an autumn holiday.

Winter marks the coldest time of the year in Boa Vista statement that has to be taken with a big grain of salt. Temperatures begin to drop in November until the area reaches its lowest temperatures from December through March. Those temperatures, it must be stressed, don't fall lower than 22°C on average. It remains a warm resort, even in the heart of winter. During this time, the area experiences lows between 19 and 21°C and highs around 25 to 26°C.

Winter is the second rainiest season on Boa Vista. Rainfall in November is typically around 10mm, December averages 15mm, January sees about 21mm, and February usually has only 11mm of precipitation. All of this is in the form of rain, as the island is too warm for sleet or snow. 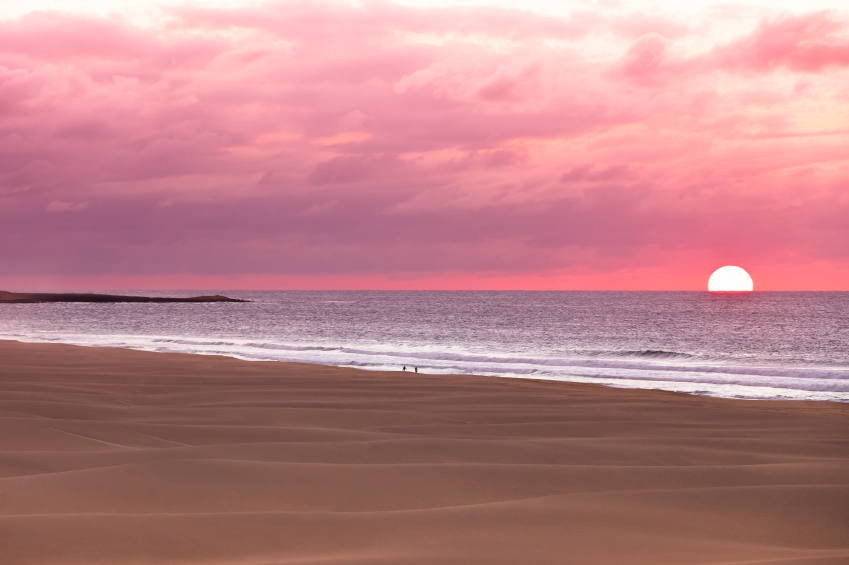 Beautiful sunrise over the beach in Boa Vista

March through June are the driest months of the year, with rainfall only happening on one day each month. Short, but heavy, showers occur during the rainy season that falls in September and October. After that, a prevailing dry wind from the Sahara desert keeps Boa Vista dry and warm from December through April.

Even when visiting this island during tropical storm season, hurricanes rarely hit the island. Most of the storms get pushed toward the Caribbean Sea far to the south of the Cape Verde islands.

You can check the weather forecast for Boa Vista here.