Located in the La Altagracia Province, Bavaro is a small resort on the east coast of the Dominican Republic sitting next to the larger resort of Punta Cana. The Dominican Republic is situated in the centre of the Caribbean and shares the island of Hispaniola with Haiti which is located on the west of the island. The capital of Santo Domingo is around 100 miles away from this resort.

The Bavaro region is well-known for its beautiful sandy beaches and is one of the most popular tourist areas of the Caribbean. It is a dream holiday destination thanks to its idyllic surroundings and wonderful weather. The climate here is typically tropical with hot and humid conditions all year round. Temperatures stay consistently high throughout the year, with monthly temperatures averaging from 25°C to 28°C, while sunshine levels are also very high.

Bavaro experiences two different seasons: December to April is the dry season while May to November is the wet season, seeing much more rainfall. The resort is also susceptible to hurricanes, which holiday makers should take into consideration when booking a trip to Bavaro. Hurricane season typically falls between June and November.

If you visit at the right time, Bavaro is a picture-perfect holiday destination with weather that can't be beaten. Travellers can soak up the sun and bask in high temperatures on the beach, which is made up of 10km of soft white sand and crystal clear blue waters. In fact, Bavaro and the adjoining Punta Cana are often named as one of the world's best beach strips. 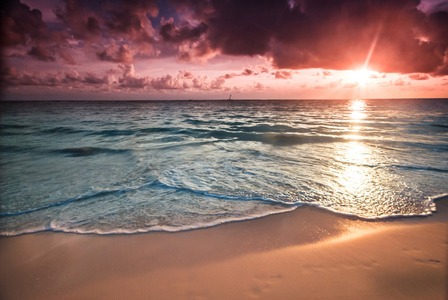 What would be more commonly known as winter, or the months between December and April, is known as the dry season in Bavaro. Rainfall levels are at their lowest of the year and February is the driest month of the year, with just 37mm of rainfall and 6 wet days. The rest of the season sees around 5 to 8 wet days a month. As you would expect, the dry season is the busiest time for tourism, especially for those visitors who want to relax on the beach without getting wet. It's also a great time to escape the colder weather of places such as the UK, which experiences freezing temperatures, rain and snow at this time of the year.

The start of the dry season experiences the most pleasant weather conditions as it's not only dry but also the coolest time of year in Bavaro, before temperatures have hit their peak. Average temperatures are relatively 'low' at 25°C in January and February, with highs of 27°C which is more than pleasant. Temperatures rarely drop below 22°C even at night time, so visitors should pack light layers to wear. The temperature and humidity gradually increase towards the end of the dry season and the start of the wet season. Daytime temperatures can sometimes rise to highs of 28°C, but the heat is usually abated by the cooling trade winds that blow over the island.

The 'Alize' is a Caribbean trade wind that brings mild breezes from the northeast, occurring mainly between the months of November and February. With its location on the east coast, Bavaro is in the perfect position to enjoy the Alize. Sea temperatures also hover between 26°C and 27°C during this time of the year, which is perfect for enjoying swimming and water-sports.

Sunshine levels stay around the same all year round in Bavaro, rising slightly in the wet season, but there's more than enough sun throughout the dry season. January to March sees 9 hours of bright sunshine every day, which allows lots of time to lay on the beach and get a great tan. Just remember to pack sun screen and a good pair of sunglasses as UV levels can get quite high.

The typical summer months of May to November are the wet season in Bavaro. Though the area is beautiful, this time of the year isn't the best time to visit the resort and as a result, it will be much quieter than the winter months. The wet season is not only wet, but very hot and humid. In fact, the wet season is the hottest time of the year, which can feel quite uncomfortable if you're not used to the heat. July to September see a consistent average temperature of 28°C with high hitting 30°C on the thermometer, while lows never drop below 25°C, even at night. This is great if you love high temperatures but can feel a little too hot for most people, especially with the associated high humidity levels.

As you would expect, rainfall is consistently high throughout the wet season, peaking in September after which it begins to ease off again. September sees 185mm of rainfall on average and 11 wet days. The months before see around 160-170mm each, while it drops to 150mm in October and 120mm in November at the end of the wet season. On average, there's 10 to 12 wet days a month. However, most of the rain tends to fall in tropical, heavy downpours that are over quickly and rain is often restricted to the evenings, which means the day times still enjoy great beach weather. There is also still a good amount of sunshine during the wet season, with 9 to 10 hours of sun a day, which is slightly more than the dry season.

One of the main features of the weather in Bavaro is the risk of hurricanes as the resort sits in the Caribbean hurricane belt. The most common times for a hurricane to occur in the Dominican Republic is August and September but the official hurricane season is between June and November,  so one could happen at any time in these months. Visitor shouldn't worry too much though the island is only affected by hurricane activity every five years on average, and a direct hit is very uncommon, occurring around every 20 years. The last major hurricane to effect the region was category three Hurricane George in 1998. In addition to this, the Dominican Republic is well prepared for hurricanes, and most hotels on the island are hurricane proof.

Despite the small chance of hurricanes, many visitors actually choose to visit Bavaro in the wet season to enjoy the peace and quiet of fewer crowds and to take advantage of lower prices. If you're willing to risk the chance of some wet weather, it could be a good idea to visit Bavaro at this time, though travel to the area should be preceded by some research into predicted hurricane activity. It's a good idea to check the weather forecast for Bavaro before travelling too.

Catamaran in the Caribbean sea.