The latest and today's weather in Adelaide , Australia updated regularly

Although located on the opposite side of the world, Adelaide provides typical weather very similar to what is experienced in the Mediterranean. With year round mild weather and sunshine, Adelaide promises an enjoyable vacation at any time of the year. Alike any city situated in the southern hemisphere, Adelaide's seasons are opposite to what is experienced in Europe, therefore this city is a great place to escape the icy temperatures common to many European countries. Even though Australia is renowned for its hot weather all year round, Adelaide is located in one of the most southern regions of the country and still tends to get fairly chilly during the winter. In Adelaide much of the daily weather is dependant upon the wind speed and direction. As warm dry winds from the northern outback of central Australia flow in during the summer, the more humid, cooler winds from the southern Indian Ocean sweep in during the winter. Daytime temperatures in both summer and winter can be extremely hot however when the sun goes down climates tend to drop dramatically and nights become very cold and chilly. When travelling to Adelaide it is always a good idea to take warm clothing for when going out during the night.

Summer Similar to the Mediterranean, although featured in December, January and February, Adelaide's typical summer weather can get particularly hot. Loads of fine, sunny weather is featured and only occasional showers are known to occur. This is somewhat different to other states, such as Queensland and the Northern Territory as to them; summer is the wet or rainy season. Temperatures during the summer months average in the low to mid twenties, however January and February typically see climates rocket above 30ºC. Although Adelaide is not as hot as the northern regions, sunshine hours are a lot longer averaging at ten hours during the city's hottest months. 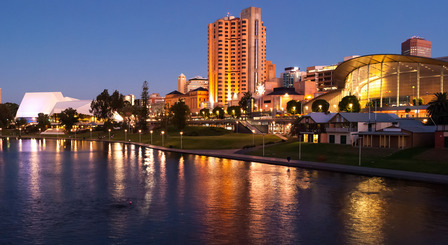 The winter in Adelaide experiences quite diverse weather as one day can be warm and sunny and the next can be cool and overcast. Daytime temperatures during the winter generally sit between 13ºC and 15ºC and rarely ever fall below 10ºC. It is after nightfall when the city experiences real winter as climates can drop to as low as 5ºC. Rainfall during the winter is higher than any other season however this should never fool travellers as sunshine hours are still high creating warm winter days.

Although not as high as winter, rainfall levels during both autumn and spring tend to be rather high with May being the wettest month of the year. Showers tend to be brisk and short lived and sunny weather is generally not far behind. Average temperatures during the shoulder months range anywhere from 9ºC to 22ºC, making an ideal time to vacation.