The latest and today's weather in Sarigerme, Turkey updated regularly

Around where the Aegean Sea meets the Mediterranean Sea, you will find the beautiful coastal resort town of Sarigerme, in the southwest of Turkey. Just like the neighbouring resort town of Marmaris, Sarigerme is home to a desirable Mediterranean climate, complete with long hot summers and mild and short winters. With warm weather and sea temperatures all year round, this is a climate that is very favourable for turtles. The waters outside the town are the home of many different species of saltwater turtles!

The town is a beachside haven, so obviously if you want to best utilise this, you should plan your trip in the summer months. However, be warned the summer highs can reach in excess of 40°C and the daily lows in July and August only fall to about 21°C. This may be of concern if you aren't holidaying near the sea. Fortunately, in this resort you've got the Mediterranean Sea at your disposal, so you are never far away from an idyllic refresher!

In the evenings, the town is washed over by the prevailing sea breezes, which result in a fresh, clean feel in the air and a perfect atmosphere for kicking back on the seaside promenades and enjoying some local cuisine and a drink or two.

The resort's beach itself is a beautiful, long, white sandy beach with safe waters to swim in and plenty of activity from the beachside cafés and bars. One thing to remember when visiting is to be sure to pack some mosquito repellent as in the summer months in particular they can become quite the nuisance. So, come prepared if you don't want to ruin your summer body with red bites!

For an up-to-date and detailed weather forecast for Sarigerme, you can visit this page.

In the height of summer you will bask in 13 hours of sunshine per day, peaking at 14 hours in July! Most days have clear skies and uninterrupted sunlight as well as scarce rainfallerfect summer holiday conditions. The hottest days of the year are generally between mid-July and mid-August, when temperatures rise to average highs of 31°C in the afternoon and don't fall below the average lows of 21°C during the night. June and September, respectively the first and the last month of the summer season, are slightly cooler, but still have amazing temperatures. The average daily temperature is highest in July and August, when it's at a warm 26°C. June and September both have an average temperature of 23°C. The sea water sees temperatures between 23°C in June and 26°C in August, absorbing the summer's heat and creating absolutely perfect swimming conditions.

As the weather gets this warm and the sun beats down, make sure to slop on plenty of sun cream and drink sufficient water to prevent both sunburn and dehydration.

In addition to plenty of sunshine and high temperatures, summer in Sarigerme is also characterised by an almost complete absence of rainfall. Between the two peak months of July and August, the total amount of rainfall doesn't exceed 9mm and there are hardly any days with rainfall. June and September receive slightly more rainfall, but still nothing to worry about. This is by far the driest time of yeargain, ideal beach weather.

The autumn months of October and November are much, much quieter than the hectic summer months. They do, however, still have comfortable temperatures. October days are 19°C warm on average, while the days in November are 14°C warm. The respective high and low temperatures are 24°C and 13°C in October and 19°C and 9°C in November, all of which are pleasant compared to other destinations in Europe this time of year.

The sea temperature, too, remains relatively comfortable this season. It averages between 21°C and 23°Cfternoon dips in the Mediterranean Sea could still be pleasant this time of year.

Autumn does see a large increase in rainfall though. As more clouds move in during the course of the season, the amount of rainfall increases from 80mm in October to 139mm in November. The number of days with precipitation ranges from 5 to 8 per month. November is the fourth-wettest month of year in Sarigerme, after the three following winter months.

With more rain clouds comes, of course, less sunshine. While October still has 10 hours of sunshine per day on average, November is significantly less sunny with 8 sunshine hours per day. This is still very high by all accounts! 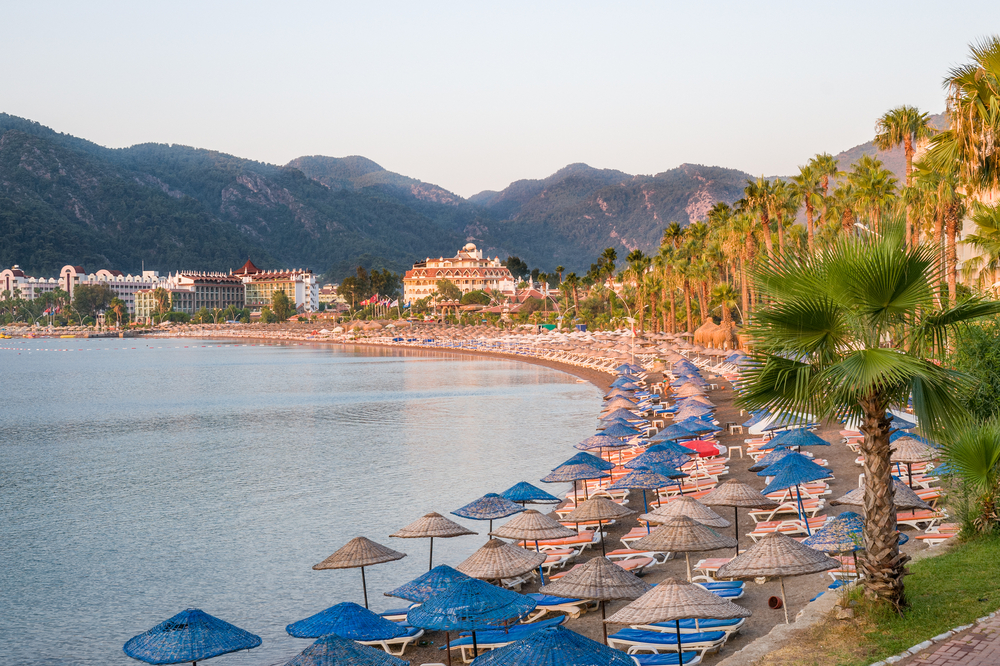 Winters in the region see the coastal towns becoming quiet and offer a stark contrast with the hub of activity in the summer months. The winter months are mild however, with December seeing daily highs of 16°C; at night the mercury falls to a night-time low of 7°C. Typical of a Mediterranean climate, winter is when the region sees its heaviest rainfall. This weather lasts through until about mid-March, when it clears up and gets ready again for summer.

The coldest time of the entire year falls between mid-January and mid-February. Those two months have an overall average temperature of only 10°C. At night, the average low temperature drops to about 5°C, while in the afternoon, the average high ranges around 14°C, which is still ideal for walks or other outdoor activities.

Winter is by far the wettest season in Sarigerme. December and January receive respectively 233m and 216mm of rainfall, which are the two highest monthly totals. February is slightly drier, yet still quite wet, with a total of 160mm. The most common type of rainfall in winter is thunderstorms, which happen on 52% of all days with precipitation. Light rain and moderate rain are regularly observed as well.

Spring initiates the warmer part of the year. This season begins mid-March and runs through May, a period that is characterised by rapidly increasing air and sea temperatures, decreasing rainfall totals and clearing skies. The amount of sunshine also rises throughout the season.

April experiences temperatures that average 14°C, while May is also a lot warmer with an average temperature of 19°C. Rainfall has decreased dramatically by May, which is one of the driest months in the year in Sarigerme. Sunshine is generally quite high, as it is throughout the year in this resort, but increases from 10 hours per day in the beginning of spring to 13 hours toward the end.