Founded in 1835 to produce sea salt to export to Brazil, Santa Maria now acts as a holiday getaway for visitors coming from all around the world. Tourism is the resort's main export now, with major resorts and smaller hotels providing accommodations to visitors enjoying the beaches, area attractions and year-round pleasant weather.

Santa Maria has a semi-desert climate with high temperatures and low rainfall year round. The resort sits on the southern tip of Sal, one of the windward Cape Verde islands, and benefits from constant northeast trade winds that have made Santa Maria famous for water sports such as surfing, windsurfing, kite-surfing and sailing. The clear waters of the Atlantic Ocean are also great for scuba diving and big game fishing.

In Cape Verde, endless sunshine, perpetual heat, a reliable wind and the absence of rain are pretty much guaranteed, no matter what time of year it is. Santa Maria sees around 350 days of brilliant sunshine each year; clouds sometimes flit unassumingly across the sky, but grey days are rare.

Surrounded by water and the Canary Current, Cape Verde avoids the extremes of temperature seen in the true dessert. Sal is a flat, topographically featureless island presenting no barrier to wind, hence its susceptibility to sandstorms and lack of precipitation. 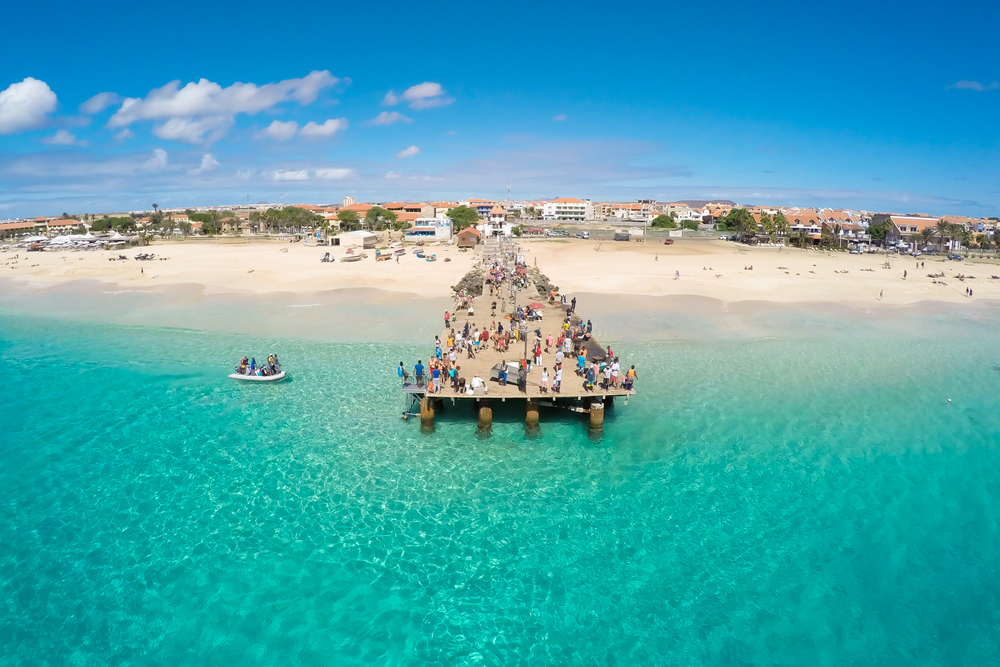 In June, the average rainfall is only 1mm, but it jumps dramatically to 11mm in July and 53mm in August. The rain still only falls over an average of four to six days during the month though, so overall, the weather is relatively dry. Not to mention, the sun shines on average 8 to 11 hours a day during the summer. The sea temperatures range from 24°C to 27°C (about 75°F to 81°F), very warm and pleasant for swimming and water sports.

With the peak of the heat also comes a peak in humidity, not anywhere near tropical levels, but still less pleasant than any other time of the year in Cape Verde. However, the wind somewhat tempers the heat during these months. 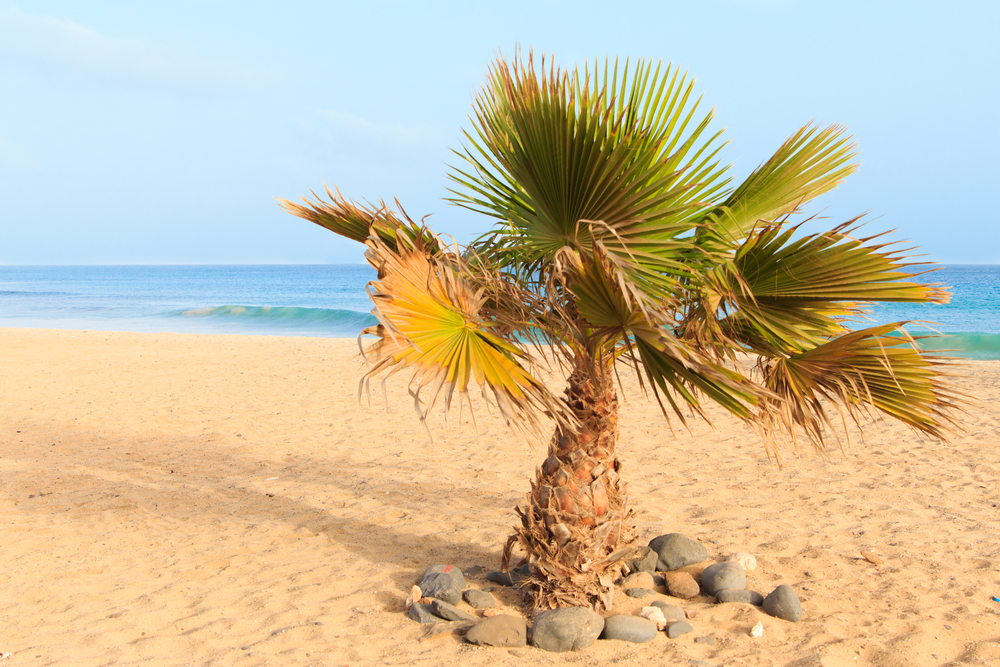 A lonely palm on the Santa Maria beach

At the start of autumn, the average high temperature for this island in Cape Verde stays in the high 20s, peaking in September at a warm 29°C (about 84°F). The average highs for September, October and November are between 27°C and 29°C (around 81°F and 84°F), while the average lows drop down between 22°C and 24°C (about 72°F and 75°F). The island gets 9 to 10 hours of sunshine a day during this time as well.

When September hits, the rainfall is at its highest point for the year, with an average of 77mm. In October that average rainfall drops to the second highest annual amount of 53mm, but by November there's only 9mm. Even at its rainiest, the rain only makes an appearance on around seven days in September and only four days in the other two autumn months. Despite the increased rainfall, there's no need to avoid Santa Maria, or anywhere else in Cape Verde, as rainfall is limited to very brief showers that quickly return the sky to its usual sunny state.

The autumn is still a great time to enjoy swimming and watersports at the resort, as the sea temperatures hang between 26°C and 27°C (about 79°F and 81°F), very warm and pleasant. The humidity continues to drop and the winds help make the weather feel great in spite of the humidity. 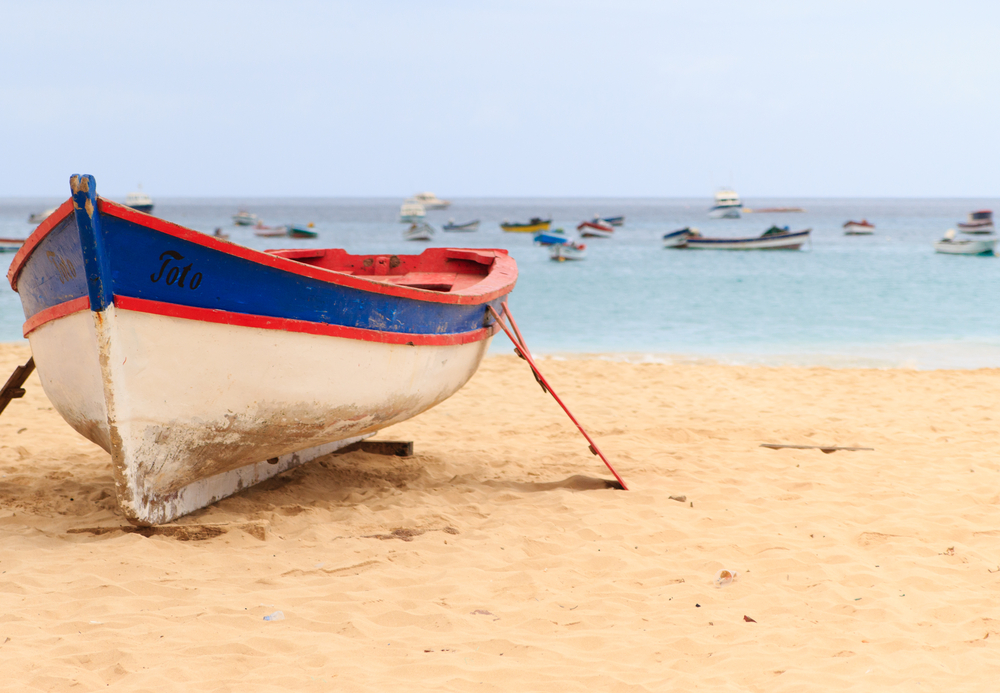 A boat anchored on the Santa Maria beach

Rainfall drops significantly during the winter, with an average of only 1 to 3mm falling over two to three days per month. The sunshine amounts range between 9 and 10 hours a day each month during the winter which will be glorious for anyone coming from colder climates!

The sea gets down to around 22°C to 25°C (about 72°F to 77°F), but this is still more than warm enough for the water sports which make the area so popular. The northeast trades continue to provide wind for sails, as well as a cooling breeze on land. 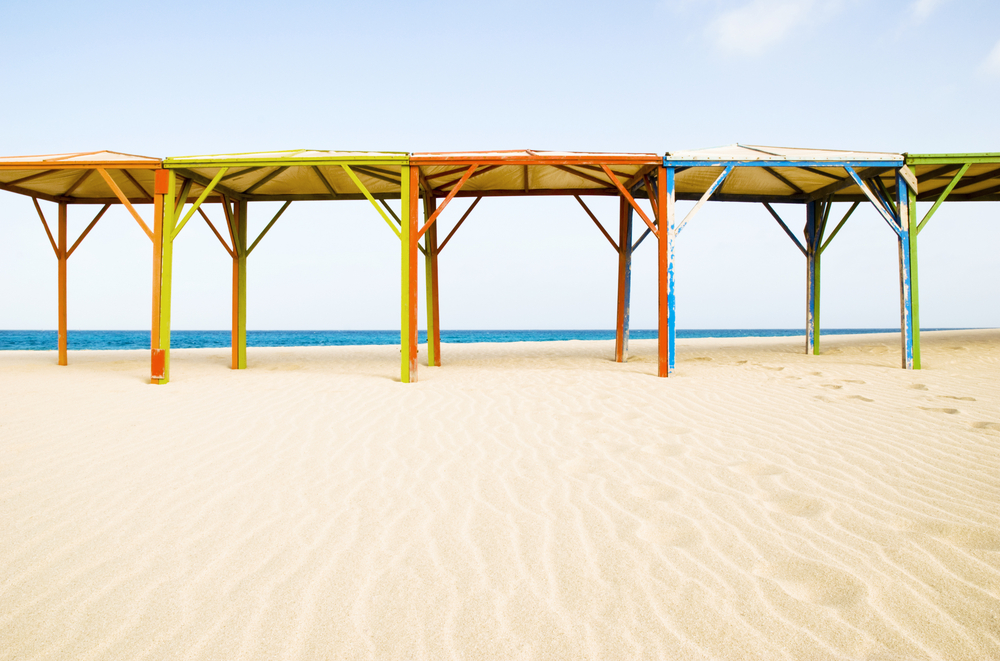 During the spring, temperatures continue to rise, ranging between a very nice 22°C to 23°C (about 71°F to 73°F). The average high is steady through March, April and May, sitting at 25°C (about 77°F) for all three months. The lows for the spring drop to 18°C to 20°C (around 64°F to 68°F), still very comfortable at night, but milder than other times of the year. Each of spring's month sees 11 hours of sunshine a day, so there is plenty of time to enjoy the beautiful weather. If you would like to know how we calculate these weather figures please take a look at this page.

The rainfall continues to fall off completely, with only 1mm falling on average during each month of the spring. These rainfalls tend to be very light as well, with that small amount falling over three to four days a month on average. Take advantage of the very steady and very warm sea temperatures during the spring months, which average 23°C (about 73°F). All in all, this is a perfect time of the year for a visit to Santa Maria!

While not too common, the showers which fall in the autumn months can sometimes turn into heavy storms, causing flash flooding before they disappear. The sandstorms that can happen anytime of the year are another hazard. The position of the Cape Verde islands, just off the west coast of Africa, assures high temperatures. The islands' proximity to the Sahara means they are also heavily influenced by hot, arid weather coming over from the continent, often bringing momentous sandstorms. And, because there is almost zero vegetation on Santa Maria due to the arid climate, the sands move around even more. Apart from being unpleasant, these sandstorms disrupt transport, grounding planes and make driving impossible.