The Algarve weather is usually fine and sunny. Its dramatic plunging limestone cliffs and sun drenched beaches make it a top holiday destination. Jack Pitts discovers when, where and what to do – and what to eat…

The Algarve region is the south-western tip of the continent and the furthest corner of Portugal. So you’ll feel like you’ve reached the end of the earth, not just Europe. 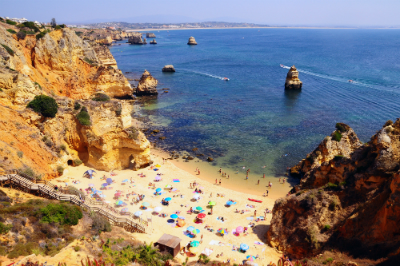 Making the most of the Algarve weather

The Algarve weather is almost never bad and with little seasonal variation. You can expect blue skies and sunshine for most of the year.

The ideal time to visit Algarve is between October to March when prices are low, tourists are few and the UK is cold. Algarve gets more than 3,000 hours of sunshine per year, and even in the depths of winter temperatures rise into the 20s.

October enjoys warm weather, with an average of seven hours of sunshine a day. Though expect the weather to become a little rainer towards the end of the month.

Prepare to share those blue skies with a few thousand others if you hop over during the high season. Visiting in July and August won’t hinder your tanning but you might get impatient queuing for an ice cream.

Algarve itself is a big place, 2000 square miles in fact, so there’s a lot of variation. Generally, the region is divided into three areas: east, west and central Algarve, each of which has its own appeal.

The west of the region is more rugged and wild with fewer inhabitants. The stunning Parque Natural do Sudoeste Alentejano e Costa Vicentina hugs the coastline for 80 miles, where its often empty beaches are temples of pure relaxation. 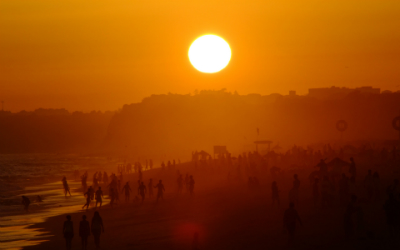 It is here also that you can find Cabo de São Vicente (Cape St. Vincent). This is a sacred place for millennia and the most westerly point of Europe, nicknamed the “End of the World”.

To the east, past the capital Faro, is a landscape less dramatic but no less beautiful. Jagged crags relent to rolling hills with whitewashed villages nestled between them.

The central area is best known for Quinta do Lago, Vilamoura and Vale do Lobo, a land of luxury resorts dubbed the “golden triangle”. Here you can find any number of top-quality hotels and restaurants. You can also find that type of nightlife that sometimes becomes morninglife.

People come to this part of Portugal for different reasons. Some come for the Algarve weather. While others love the sea air and wild beaches of the west. Others come to sip cocktails and sample the coast’s impressive 30 golf courses.

But as the area consists mostly of beaches, the region’s main appeal is its golden sands and plentiful sun. Many beaches have been awarded the prestigious blue flag award, but others, particularly in the south, are hubs for beach bars and late night parties. However, there is much more to Algarve…

It’s famous for its water sports, its big waves and sunshine, making it a magnet for kitesurfing and surfing. To join the swell, try Algarve Watersport or Kitesurf EOLIS. 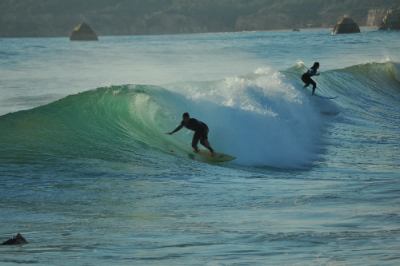 Those who require less adrenalin can enjoy the modest array of walking trails. Or have a drink in some of the stunning Moorish and Roman ruins, found across the region.

The inland region is littered with elegant Portuguese villages. 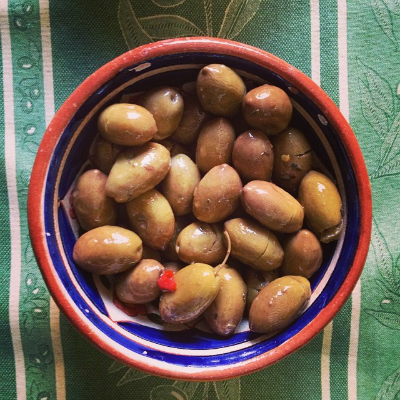 Algarve is famous for its olives. Driving around you will see rows upon rows of the distinctive little trees. Enjoy these tasty treats, ideally alongside a large glass of spicy Portuguese red wine.

It’s the seafood that you must not miss. There are few greater pleasures than sampling the local sea life just a few hours after it’s been caught.

Find somewhere that looks out to sea, Aventura or Rossio will do, and order something you’ve never tried. Open another bottle of Portuguese fine wine and watch the sun set over the edge of the world.

Can Warm Weather Prevent The Spread of Coronavirus?

6 holiday destinations to stay cool in the heat wave