Khao Lak is a seaside resort situated in the Takua Pa district in the Phang Nga province of Thailand, which is 100km north of Phuket. Its name is derived from the National Park Khao Lak-Lam Ru and "Khao Lak" means "Lak Mountain", one of the main peaks in the park.

Khao Lak is a popular tourist destination but mainly caters for families and people who are looking for rest and recuperation. Unlike nearby party resorts, it is not a lively town but a peaceful and calm resort.

The weather is warm throughout the year making this a great location for families with or without children who want to enjoy the outdoor activities and gorgeous sandy beaches which Khao Lak has to offer. There is the beautiful and peaceful Khao Lak beach with its golden sand and various attractions and activities on offer such as excursions to fishing villages, coral reefs, islands, waterfalls, caves and a nearby jungle.  You might also want to visit the national park or other local beaches.

Khao Lak has a typically tropical climate that's regulated by annual monsoons. Though temperatures remain warm throughout the year, like much of Thailand there are 3 main seasons in Khao Lak; the wet season, the dry season and the hot season. You can look at the weather averages which provide weather forecasts to give you a good idea of the weather for the time when you are planning your holiday.

Unfortunately in 2004 the devastating effects of the Tsunami (Indian Ocean earthquake) hit this town, when the destructive wave hit nearly all nearby coastal areas.  Most coastal resorts were demolished or extremely damaged with huge loss of life and the event was a massive hit to the local economy. At the time Khao Lak was one of Thailand's fastest growing tourist destinations and it was consequently dramatically hit. However, Khao Lak has now recovered from the devastating effects of this natural disaster and its tourism is blooming again. 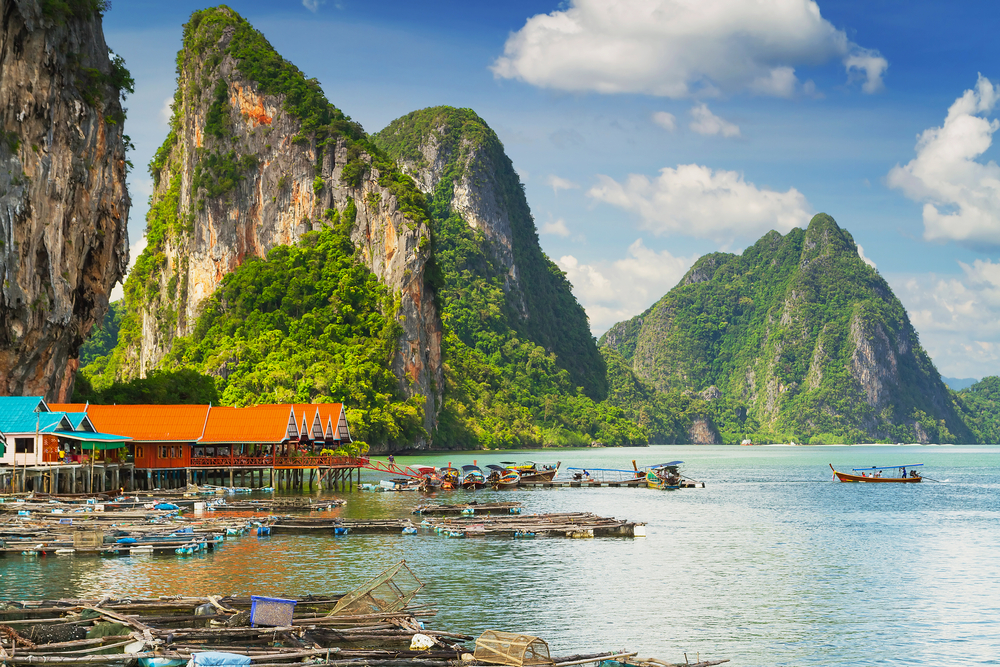 From November to February, Khao Lak experiences its dry season, also known as the cool season or tourist season. This is a popular time to visit the region as the weather is perfect for relaxing on the beach and spending time outdoors. As a result, the region will be at its busiest as this time of year and the beaches will be full of holiday makers.

The climate is drier at this time of the year as a result of north east winds blow in from China which dry the air. November still sees 189mm but this falls to 67mm in December and just 30mm in January, the driest month of the year which sees just 3 wet days.

Temperatures in the dry season are hot, as they are all year round, though they are slightly cooler than other months, with cooling breezes helping to control the heat. The season sees an average temperature of 28°C while the highest daytime temperature is 34°C and the lowest average evening temperature is 23°C. There's also an abundance of sunshine in Khao Lak at this time; if fact it is the sunniest season of the year, with between 8 and 9 hours of sunshine and a glorious 10 hours in February.

While the sunshine and temperatures can feel quite hot and relentless in the dry season, visitors can take advantage of the dry weather and spend plenty of time on the beach and cooling down in the sea. The average sea temperature at this time of year is 27°C. Visitors are advised to take care in these high temperatures though, making sure to wear plenty of sun screen, staying hydrated and seeking shade where possible. 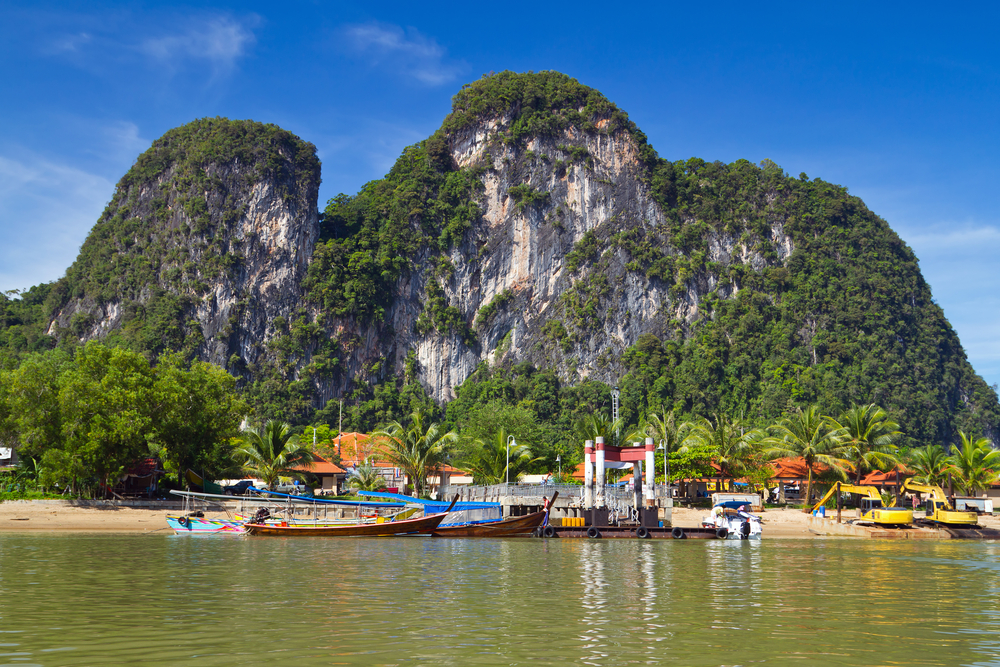 Additionally, the high temperatures and humidity levels are joined by wet thundery showers at times. Frequent and short rainfall is not uncommon at this time of year, with 79mm of rain in March and 115mm in April. The wet weather peaks in May, which sees 253mm of rainfall and 24 wet days as the wet season sets in.

While there is no bad time to visit Thailand's beautiful coast, many travellers can find the heat in the hot season too much and prefer the dry season for a holiday in Khao Lak. As a result, the resort will be a little quieter at this time of the year. 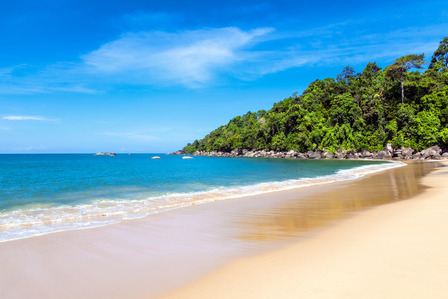 June to October is wet season in Khao Lak as the south west monsoon arrives on the coast. Rain dominates the weather at this time of the year. At the start of the season, June sees 238mm of rainfall but this peaks in September and October, which experiences heavier downfalls as the monsoon sets in. These rainy months see 347mm and 352mm respectively, falling over 23 wet days.

While it may sound like the weather is constant rain, that's not the case. Rainfall tends to occur in the late afternoon or early evening in Khao Lak and is often short in duration. There are frequently long intervals of sunshine between the showers. During this season Khao Lak has an average of 20 sunny days per month and around 5 to 6 hours of sunshine a day.

The wet weather can put off some holiday makers and the resort is quiet this season. However, despite the chance of rain, Khao Lak still offers beautifully warm temperatures at this time of year. In the wet season, the average temperature remains around 29°C with highs reaching 33°C and the lowest average evening temperature falling to just 24°C. This means that visitors can still enjoy the area's outdoor attractions between rainy weather. As an added bonus, hotel rates are usually much lower at this time of year. 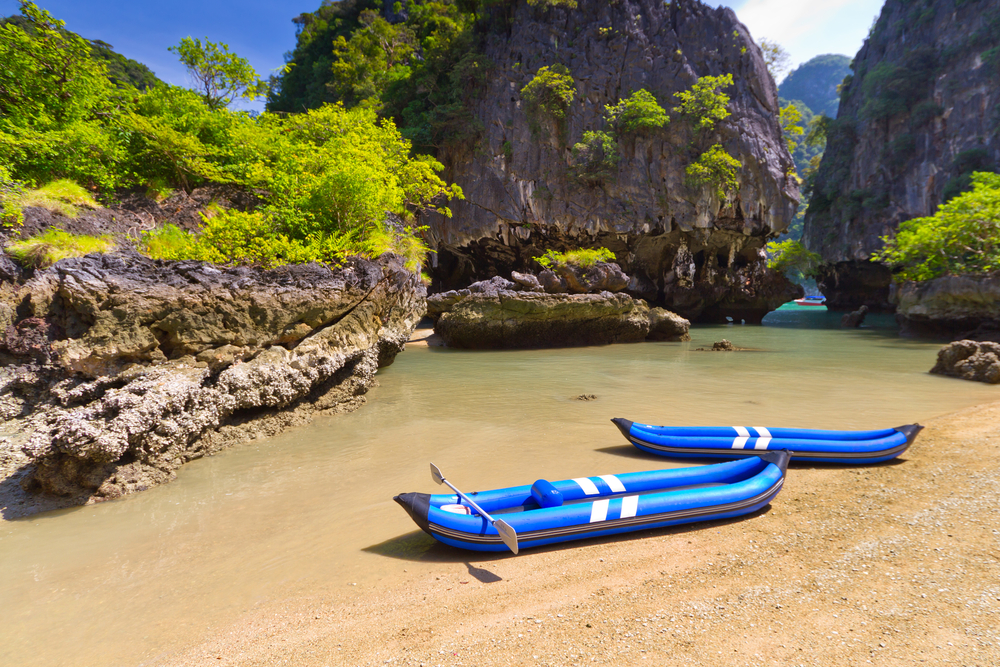 Kayak trip to the island of Phang Nga Bay