Chang Mai is the largest city in northern Thailand and capital of Chiang Mai Province. Just over 680km north of the capital Bangkok, the city is situated in the lush forested hills of the north. The region is popular with tourists wanting to explore the jungles of Thailand and glimpse the unique cultures of the many hill tribes. The city of Chang Mai itself offers much to the visitor as well, with bustling markets, ancient temples and a vibrant nightlife. The tropical climate of Chang Mai is warm year round with seasonal rainfall, in accordance with the rest of the country. There is a little more variation in temperature across the year than in the southern and central regions of Thailand due to the northerly location and hilly terrain.There are three basic seasons: rainy (May to October), cool (November to February) and hot (March to May). 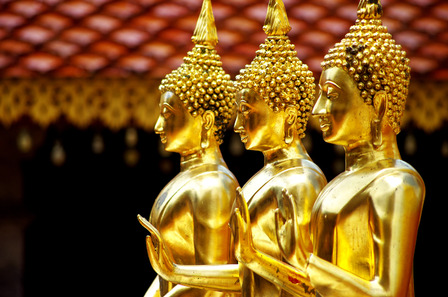 Rainy Season (May to October)

Between May and October Thailand and indeed the whole of South East Asia is subject to monsoon rains; the hot air that has built up over the Asian land mass draws in cool moisture-laden air from the Indian Ocean in the southwest. Chang Mai's northerly location means they arrive in the city a little later than the southern areas of Thailand. The latter part of the monsoon is the wettest period for Chang Mai, with August and September averaging 230mm of rain per month. By October the rains have begun to recede and rainfall averages 120mm. The monsoon is never an exact science; some years bring a lot more rain than others. Flooding can be a danger in the region during a particularly heavy monsoon season, as happened in August 2006. High rainfall means high humidity which can make the heat unbearable. Temperatures start out very high, averaging at a high of 34°C in May, but reduce throughout the season to an average high of 31°C in October. Night time temperatures stay up in the mid 20s. Don't be too put off by the monsoon; it can still be a good time to visit with the cheaper prices and fewer crowds making up for the rainfall. If you're lucky you'll still get plenty of sunshine, and a lot of the downpours are heavy but over very quickly so you don't need to take shelter for too long. June and July are the driest months of the rainy season and still receive an average of 6 hours of sunshine per day.

It is hard to describe a period with average temperatures above 22°C as cool, but its all relative and November to February is the coolest time of year in Chang Mai, making it the ideal time to visit. Humidity is at its lowest of the year too which is pretty important if you want to do some trekking in the nearby mountains. Temperatures are at their most varied in this season, moving between daily highs of around 30°C to lows of around 15°C. At higher elevations around the city temperatures can get as low as 5°C at night. December and January are the coolest months. The cool season is very sunny, with days enjoying 9 hours average sunshine. Rainfall is next to nothing.

Hot Season (March to May)

From March the temperatures build and with the increasing humidity it starts to get uncomfortable. March and April have average daily highs of 35°C or 36°C and it can get even hotter. For many this is too much and if you are looking for an active holiday it is a time to avoid. Rainfall remains low until May when the monsoon rains finally break bringing welcome relief to the searing temperatures.