While it may seem too difficult to get to, visiting the island nation of Malta will leave most visitors in awe of its beauty and offerings. Located in the middle of the Mediterranean Sea, the island measures a compact 27km by 14km but packs a lot into a very small space. With a history that dates back thousands of years, the island has been influenced by a number of different cultures and civilizations that have each left a distinctive mark. Thanks to the area’s long history, there is no shortage of activities, sites and adventures to be had on the island. 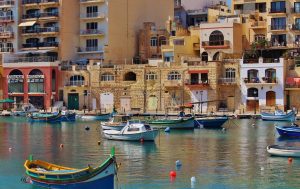 One feature that visitors will notice immediately is the friendly nature of the locals. With a safe environment for children and adults, visitors are quick to realize that the island natives are warm, kind-hearted and always willing to lend a hand. With most locals speaking English, there are no barriers to being understood and visitors will also quickly find out that there are plenty of people willing to offer advice on where to go and what to do.

Even though Malta is a year-round destination, the most popular time to visit is during the summer months. From June to August, there is hardly any precipitation, with just 5mm expected in June, no rainfall in July and just 6mm in August. On the flip side, the wettest time of the year in November and December with over 100mm of precipitation expected in both these months. Summer is also a great time to visit thanks to afternoon high temperatures averaging between 29°C-32°C (84°-90°F) and overnight lows only between 24°-27°C (75°-82°F).

In the winter, visitors will need a light jacket even though temperatures never dip below freezing. January is the coldest month with an average overnight low of 13°C (55°F) and a high of 16°C (61°F). Sunshine is always plentiful on the island any time of the year with between 7 and 14 hours of sunshine on any day. Of course, there are more sunshine hours in the summer giving more people the opportunity to catch some rays and enjoy an average water temperature of 22°-27°C (72°-81°F).

Those travelling to Malta will have no shortage of resorts to choose from. The island is home to numerous five-star resorts including the Radisson Blu Resort and Spa, Malta Golden Sands. The hotel consists of 329 rooms, most of which offer breathtaking views of the nearby sea. Additionally, guests can enjoy multiple on-site restaurants, private beach access, free internet and much more. Corinthia Palace Hotel and Spa also offers visitors a secluded oasis of tranquillity and only the best in service and care. Located within minutes of some of the island’s most popular sites, this resort will help make yours a vacation to remember.

Of course, being surrounded by water means Malta is home to beautiful beaches. The best beaches are located along the northern and western part of the island and offer guests a chance to relax or try snorkelling, scuba diving or other water sports. Mellieha Bay is the largest and most popular beach on the island. With its shallow water, it is also the perfect spot for families with young children. It’s a haven for those with an adventurous streak as there are plenty of activities such as kite surfing, windsurfing and jet skis. Other popular beaches include Golden Bay known for its snorkelling and scuba diving opportunities as well as Blue Lagoon with its white sand and crystal clear blue waters. This particular beach is popular with tourists and locals and it is advised to get a spot early in the day, especially in the summer months.

There are plenty of other sites to see in addition to those near and under the water. Thanks to a long and illustrious history, the island of Malta is dotted with sites nearly everywhere a visitor looks. Some of the most popular spots include the ancient Hal Saflieni Hypogeum. These caverns were carved out nearly 5,000 years ago. The Tarxien Temples are another prehistoric site that is not to be missed and the National Museum of Archeology is a great choice to get an overview of the history of the island and its influences. One of the nice factors about the island is that due to its compact nature, visitors don’t waste a lot of time travelling from one site to another. Many of the more popular spots make for an exciting day trip with visitors being able to return to their hotel by evening.

Despite its small size, Malta is home to some wonderful restaurants including the Mad Hatter Bar and Grill. The American food is combined with slight Asian and Caribbean flavours and offers music during the week in addition to a fun and relaxing atmosphere. For those who want some nightlife, St. Julian’s is the place to be. Full of bars, clubs, restaurants and pubs, there is always a party going on. One of the more popular spots is the Footloose Fun Bar. Patrons can dance the night away with music from the DJ and plenty of alcohol to keep the party going.

The island of Malta is one that is steeped in history, but that doesn’t get in the way of allowing visitors to have a good time. With numerous high-end restaurants and hotels, there is plenty of luxury on the island as well as good times. With much to see on land and in the ocean, a trip to Malta should be on everyone’s list!