Historic Temperatures for 25th May in Santo Domingo

Santo Domingo has a tropical climate which sees warm and humid weather year round. Temperatures vary little and seasons are defined mainly by rainfall. There are two seasons: one wet and one dry.

Santo Domingo lies on the Dominican Republic's south coast and due to the changing direction of the prevailing winds, it gets its rainy season at the opposite time to the north coast towns, such as Samana and Puerto Plata. This means that you'll normally be able to find fine weather on the island; if it's raining it one place, chances are it will be sunny somewhere else.

Santo Domingo lies in a hurricane zone meaning that it can sometimes be hit by strong tropical storms and hurricanes. Being on the coast it is more vulnerable to these violent storms than inland areas. The official hurricane season for the Caribbean area is from June to November, but in the Dominican Republic the most likely period for a hurricane is in August and September. On average the area is only hit by a hurricane once every 5 years, and a direct hit on Santo Domingo is rare: an average of once every 22 years since records began. 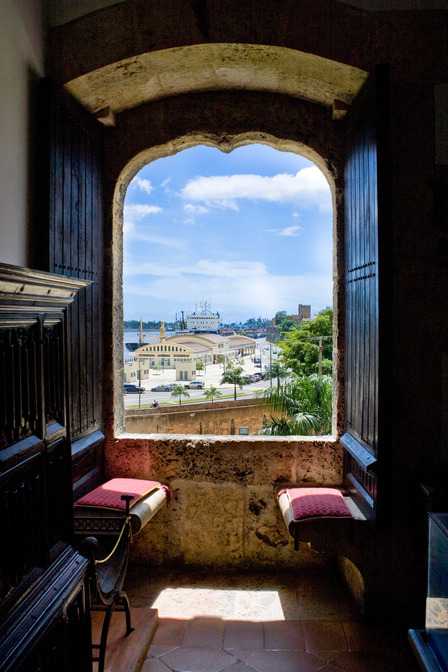 As with most places, Santo Domingo can experience abnormal weather for example an extended dry period, or an unusually hot period, but generally weather is fairly consistant with warm sunny days interspersed with short heavy downpours and the occasional heavy storm.

Humidity is lower in the dry season but as Santo Domingo is in the tropics it is always quite high. The average high of 29ºC may take a little time to acclimatise to but is generally not unbearable. Night time lows sit at 19ºC. Temperatures much higher than the averages are usually avoided due to the cooling tropical trade winds that hit the town. The 'alize' is a well known trade wind in the Caribbean that blows steady and mild from the northeast, mainly between November and February.

As one might expect, the dry season is a lot drier than the wet season. However, showers still occur on around seven days in each month. These are short but heavy. Rainfall begins to increase dramatically in April in the lead up to the wet season. Sunshine levels sit at eight hours per day. The water temperature gets to its coolest in February and March at a pleasant 26ºC.

Temperatures are a couple of degrees higher on average. Between June and September average highs get to 31ºC and lows up to 22ºC. Humidity is slightly higher making the increased temperatures even more uncomfortable. Between August and October the water temperature peaks at 29ºC. Sunshine levels tend to hold till the end of the season when they reduce to seven hours per day which is still very good.

This season is all about rain. Violent, tropical downpours break on around eleven days in each month. As the wet season coincides with hurricane season, not coincidentally, the strength of the storms is governed largely by the Atlantic winds that create the tropical cyclones. If one is threatening to develop then weather on the island can become very severe and if a hurricane passes near the area gale force winds, furious seas and sheets of rain will terrorise the area. Luckily, when it is not raining the sun quickly comes out again and perfect weather prevails.

The last major hurricane to hit Santo Domingo was in 1998. Hurricane George was category three when it hit land. Hundreds of live were lost, thousands of homes were destroyed and flooding and landslides were widespread. Hurricane warnings are in place in the region and most hotels and buildings are hurricane proof.