Palma Nova is located on the golden south coast of Majorca, one of Spain's Balearic Islands. It is one of the most popular holiday resorts in Majorca and was the first purpose-built tourist destination on the island. The resort of Palma Nova sits just next to the notorious party resort of Magaluf. While its neighbour is a centre for all-night clubbing, Palma Nova is slightly more relaxed and attracts a quieter crowd. It's mainly visited by families and couples looking for a peaceful beach holiday where they can enjoy the great weather and beautiful surroundings.

Palma Nova enjoys a typical Mediterranean climate like much of Spain. Long hot summers and mild winters are complemented by low levels of rainfall and lots of sun. Palma Nova experiences weather conditions almost identical to all resorts on the south side of the island, for instance Palma and Cala Vinas.

Majorca has uniformly pleasant weather across its resorts though there is some regional variation. Its position in the balmy Mediterranean Sea ensures hot summers and mild winters. Majorca's mountainous terrain serves as a barrier to the southwest winds that blow over the island, creating a northeast/southwest divide in weather conditions. This means resorts on the southwest coast such as Palma Nova are slightly wetter, cloudier and cooler than those on the northeast, such as Can Picafort and Alcudia, but the difference is minimal and being the greater recipient of refreshing breezes, these areas might be considered preferable during the summer. 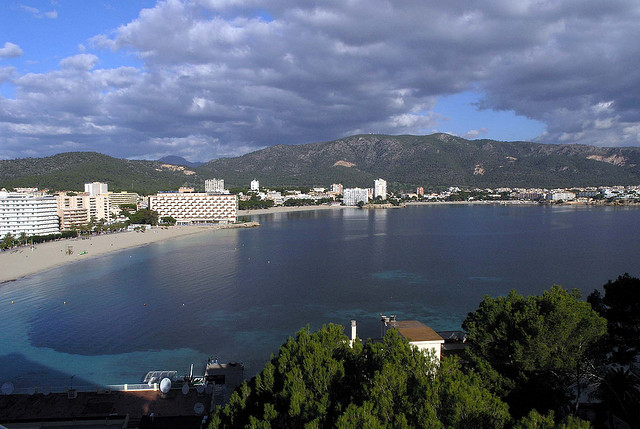 The summer season is the most popular time to visit Palma Nova as the weather is at its best. From June 'til September, the climate in Palma Nova is beautifully hot with average temperatures between 22°C and 25°C, while highs peak at 30°C in August, the hottest month of the year. Luckily, the island has a localised wind system called the Embat which means a cooling breeze helps to keep conditions pleasant during the day. Also easing the temperature at all times is the low humidity.

Summer is when you'll see the most sunshine in Palma Nova, which is often the main attraction for tourists from places like the UK, where sunshine is sparse. The resort sees 12-13 hours of glorious sunshine every day during the summer months, which allows plenty of time for tourists to soak up the rays on Palma Nova's beautiful beaches.

The sun shines uninterrupted by cloud for the most part and the high temperatures linger into the night; perfect for typically late Mediterranean outdoor dining, but sometimes a little uncomfortable for sleeping with lows still around 18°C.

While Palma Nova is generally very dry all year round, summer is the driest season of the year and the best time to visit if you want to avoid getting wet. July has the least amount of rain, at just 9mm for the whole month, while June only has 14mm. Chances are that if you visit Palma Nova in these months, you'll see nothing but bright skies and dry weather. 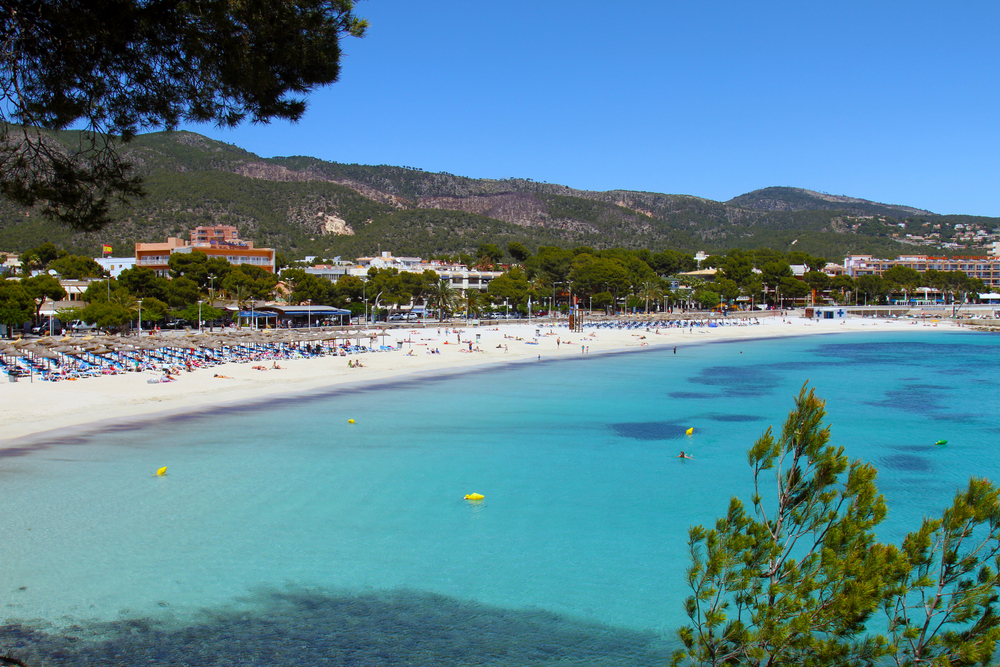 After the summer season, things start to cool down as autumn arrives in Palma Nova. In October and November, average temperatures fall to 18°C and 13°C respectively, though highs can still reach 23°C on the warmest days of October. Sunshine is also starting to decrease in autumn, although there's still plenty to be seen, with 7-8 hours a day.

Autumn is the wettest season in the resort, though still very little rain falls. Short showers followed by clear skies are the norm October sees the most annual rain with 63mm.

The lower temperatures, increasing rain and decreasing sunshine mean that Palma Nova is generally quieter than the peak summer months and crowds start to thin. This might be considered preferable to some tourists who're looking for a peaceful holiday, though by mid-November the water temperature can get a little brisk, seeing an average of 19°C, so this isn't the best time to visit if you want to take a dip in the sea.

December to February marks the winter season in Palma Nova and the resort is very quiet at this time of the year. The winter here is very mild compared to winter in other European countries and although it offers a great escape from snow and freezing temperatures, visitors should not pack their bikinis and expect to return home with a suntan.

The average temperature in winter is between 9°C and 10°C with average highs reaching around 14°C, though lows can drop to 5°C. While there are usually a few freak days that see the temperature shooting up into the high teens, there is also the possibility of it being much cooler. It rarely gets down to freezing but frosts have been known to happen. Cloud cover is indecisive and the sun comes out for around 6 hours per day.

Rainfall lessens from autumn to winter, not that it ever gets particularly high, but it is a little unpredictable this season. On average, there's around 37mm of rainfall a month though this can vary. It would be a good idea to pack an umbrella and some waterproof clothing if you're visiting Palma Nova in the winter.

Just before the peak summer season arrives, Palma Nova experiences a slightly cooler spring climate.  From March till May, the weather gets gradually warmer and sunnier. Average temperatures in March are around 11°C, rising to 14°C in April and reaching a pleasant 18°C in May. Although high temperatures are not guaranteed, by May, there are usually a few days that peak in the low 20s. In terms of sunshine, there's between 8 and 11 hours of beautiful sunshine a day.

Take note though, that night times remain quite cold as does the sea, with lows of around 5°C in spring and sea temperatures of 15-18°C, so swimming might not be a possibility and you may want to pack some warmer layers to wear in the evenings.

Despite this, late spring is a great time to visit the Palma Nova area, especially if you're looking for a great deal and you're not too bothered about sizzling temperatures. Temperatures are lower than summer but not as cold as winter and the month is drier than autumn.