The United Arab Emirates (UAE) receives an arid climate ranging from arid sub-tropical regions on the coast to large areas of desert inland.

Summers in the area are invariably uncomfortable with excruciatingly high heat all over the federation and outrageous humidity in coastal areas.

Winters are a great relief and certainly the best time to visit the federation: still hot but pleasantly so. Rainfall is low at all times and very erratic from year to year; the whole area is regularly in a state of drought. Violent sandstorms are common throughout the year. The mountains in the southeast receive a slightly cooler climate year round.

Summer, from April till October, is unbearable. Inland regions receive average highs soaring from the mid-30s up to the low 40s and can spike up to 50°C; Al Ain, which is in the interior of the federation sitting in the northeast of the state of Abu Dhabi, sees an average high of 43°C in July. It is actually an oasis city, nicknamed 'Garden City', but is still affected by the dry desert air surrounding it.

Coastal regions have this horrendous heat tempered very slightly by the sea; Abu Dhabi, the city on the central Gulf coast, receives an average high of 41°C in July. However, coastal regions are distinctly more unpleasant than desert regions in the summer as humidity soars above 90% while it stays very low inland.

Coastal summers are pretty sweaty affairs; if you think you can survive without air-conditioning you're probably crackers. If you visit during this season you should pack some light layers in preparation for the extreme cold of the hotels and shopping malls that you are likely to refer to the intense heat, no matter your views on the importance of cultural exposure.

Night times cool off to a much greater extent in the desert due to insolation, though because of the desert's higher starting point, 30°C is around the normal nighttime low for most areas of the federation in the peak month of July; that's right: 30°C is the average low. Madness.

Any rain falling in this season is usually concentrated on the Al Hajar al Gharbi mountains in the southeast and falls in short but heavy thunderstorms. These mountains act as a barrier to rain-bearing weather systems; blocking them, the mountains force clouds to form and precipitation to fall on them, so depriving the rest of the federation.

For the great majority of the summer, the northwest shamal wind prevents rain from reaching the federation. The heat of the federation is heightened by the khamsin wind from the south, and the humid south-eastern sharqi wind that blows at the end of the summer and is said to make coastal regions 'particularly unpleasant'; as if things could really get any worse. All of these winds whip up regular sandstorms which are as dangerous as they are inconvenient. These sand blizzards eat away at every available surface and can reduce visibility to mere metres. It goes without saying that getting sand in your eyes stings, especially when travelling at such high speeds. 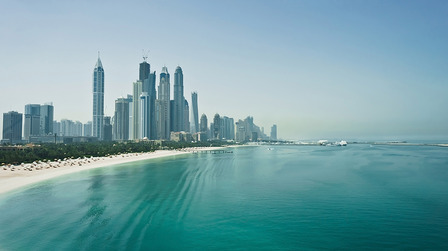 Dubai, the fastest growing city in the world.

The positive side to a UAE summer is that rain is unthinkable; the sun shines for upwards of ten hours per day; you'll sweat all of your toxins out in about three seconds and the sea temperature gets up to 33°C.

Winter, thank God, is cooler. It is a short-lived blessing that soothes the federation from November till May. Across the federation, average highs fall to the balmy mid-20s and the humidity relents. Night time temperatures drop to a delightfully cool 14°C in January and February on the coast, while interior regions get positively chilly with temperatures regularly dropping below 10°C.

The shamal wind continues to blow in winter and helps to cool the federation. The khamsin also persists in stirring up sandstorms. The sun shines a little less but most would agree that eight hours per day is more than enough when the alternate, sunnier, the season is so beastly in other respects.

Rainfall is always rare and very erratic to the point that it can be said that 'it rains most years during winter', meaning that sometimes it doesn't. February and March are the wettest months, during which northerly regions see around 50mm of rain. When rain does fall, it falls in torrential downpours. Hard-baked earth, impermeable concrete and loose sand are not great surfaces for dealing with rain. It soaks straight through dunes and sits on top of the earth to be evaporated by the sun in moments. In urban areas, it causes flash flooding which can lead to mudslides. 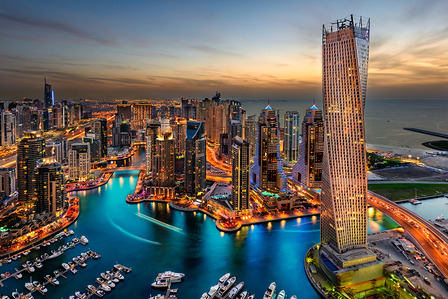 Dubai city lights over the marina.

The federation is made up of seven states: Dubai, Abu Dhabi, Fujairah, Ajman, Sharjah, Umm al-Quwain and Ras al-Khaimah. It sits on the southeast Persian Gulf coast of the Arabian Peninsula in the southwest of Asia. It also has a short eastern coast on the Gulf of Oman. Saudi Arabia and Oman share the federation's land borders.

The country is mostly desert. The Al Hajar al Gharbi mountains stretch along the southeast border with Oman and salt pans, large areas of desert covered in salt and minerals, surround the coast, stretching far inland.

The beaches are white and the waters clear turquoise, shallow and full of coral.

If travelling to this part of the world, considerations other than the weather must be made. The ex-pat community is segregated and the local culture is very different. Laws are very conservative, varying from state to state, and in many areas, the human rights situation is in a deplorable mess. Luckily for white people, racism in favour of those with lighter skin is widespread and these factors are unlikely to have much affect further than shrugging on a long-sleeved top or slipping a cheap ring onto the ring fingers of unmarried couples.