Jamaica sits in the south-west reaches of the Caribbean, a region which plays host to some of the worlds most popular holiday spots. Jamaica its self is an island of extremes in parts- while as a tourist, its fairly safe to say that you will really only see the side of Jamaica set aside for the visitors- the unrivalled beauty of the long stretches picturesque beaches, the luxury hotels and holiday villas, the crystal clear waters and long sun-filled days.

With its 11,000 square kilometres playing host to a vast array of culture, landscape and class differences, Jamaica is one of the most beautiful and interesting islands in the Caribbean. The third largest island in the Caribbean, Jamaica has a large narrow stretch of coastal plain that circles mountainous interior, with Blue Mountain Range (the islands largest range) lying in the centre- home the to islands highest point- Blue Mountain Peak, sitting at 2256 above sea level. It is these mountain ranges that allow those visiting the island to take part in activities others the snorkelling, tanning and swimming. The mountain peaks can be reached by various walking tracks- and if you're lucky to climb up the Blue Mountain Peak on a clear day you will be able to make out the outline of the coasts of Cuba, which sits 210 kilometres to its north.

All the above said, the most popular reason and by far the best reason to visit Jamaica is to simply revel in the delights of a Caribbean escape. Days spent enjoying various water sports, lying on the white sandy beaches working on your summer tan, diving beneath the crystal blue waters or partying into the night at the numerous clubs and bars found in and amongst the hotels.

Jamaica, like its neighbouring Caribbean islands and the US state of Florida, hosts a tropical climate. Typical of a tropical climate there is almost no seasonal variation in humidity and temperature. The weather is hot year-round, humidity is high and relief from the heat only arrives come sunset or when the winds blow off the Caribbean Sea. The temperature only varies across the island, depending on latitude and proximity to the coast, however, on average the daily temperature will sit in mid to high 20's, with daily maximums above 30 degrees and often reaching in the high 30's (Celsius) and minimums only falling to the low 20's.

Jamaican beach in the Caribbean.

As with every Tropical location, you must keep in mind the hurricane seasons when planning a visit. Jamaica lies in the hurricane belt of the Atlantic Ocean, so can be hit directly and severely by passing hurricanes. This being the case its best to avoid the region between July and November, as this is the time of the year classed as hurricane season and the island can be hit by tropical storms for days upon days.

The remainder of the year brings intermittent rain, particularly when in the islands capital city of Kingston which lies in a rain-shadowed area beneath the central mountain ranges- making Kingston one of the drier parts of the island. With the rain comes heavier humidity, however, you can rest assured that the showers will be short and a long period of sunshine will be not far behind. Kingston sees average temperatures across the year sitting in the 30's, with daily highs (like the rest of the island) into the mid 30's and minimums falling very rarely below 23 degrees Celsius. June to October brings an ever so slight rise in temperatures, but only by one or two degrees. This is also the period that brings the highest rainfall, so keep this in mind and come prepared for higher humidity with light clothing and plenty of cotton shirts!

If golfing, partying and shopping tickle your fancy then head to the other end of the island to the happening Montego Bay. 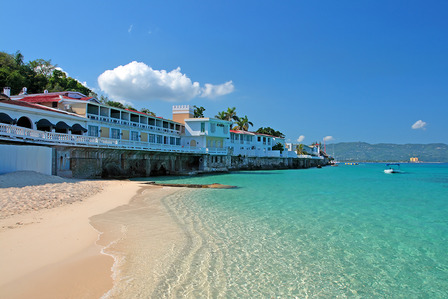 Montego Bay one of the most famous beaches in Jamaica.

Lying on the north coast of the island, Montego Bay sees slightly higher rainfall annually than parts of the south coast- which are shadowed from rain by the island mountains. Most of the year's rainfall will come from May to October, and the driest time of the year will from January to March- making this the most ideal time to visit.

See here for a more detailed overview of Montego Bay, and here for weather averages across the year.

See here for an overview of the Caribbean as a whole.