Valencia is situated on the south eastern coast of Spain known as the Costa del Azahar, or the Orange Blossom Coast. As a result of its location, the port city experiences a year-round Mediterranean climate where summers are hot and dry and winters are mild.

February marks the beginning of spring in Valencia. After some cooler weather in winter, it becomes much more mild and pleasant with warmer temperatures.

The average daily temperature in Valencia in February is 11°C however high temperatures can reach an average of 16°C on some days, particularly towards the end of the month. Temperatures can still fall quite low in February though, especially on an evening. Valencia has average low temperatures of 5°C in February, so visitors should bring warm layers and jackets to wear when they're out and about at night.

There is also more sunshine to be seen throughout February than in the winter months. Valencia sees an average of 8 hours of sunshine per day in February and a 52% chance of a sunny day, making it possible to get a nice tan.

With a good amount of sunshine, holiday makers may want to hit one of Valencia's many beaches for a spot of sunbathing.

When visiting Valencia in February, do be prepared for a small chance of spring showers. While there is less rain than January, March and April, there is still a 21% chance of precipitation with 31mm of rain falling throughout the month. However, these downpours tend to clear up quickly to clear and bright skies. There's only a 14% chance of a cloudy day in February.

If you don't mind the odd rainy day and milder temperatures, February is a fantastic time to visit Valencia. There are less tourists at this time, so visitors can see the sights without the crowds that occur in summer.

Although it is a city, Valencia has a number of great beaches for holiday makers to visit. Those closest to the city are Las Arenas and La Malvarrosa which are both Blue Flag beaches and are easily accessible from the centre of Valencia. Swimming and water sports are also an option, though average sea temperatures are still quite cool at 15°C. 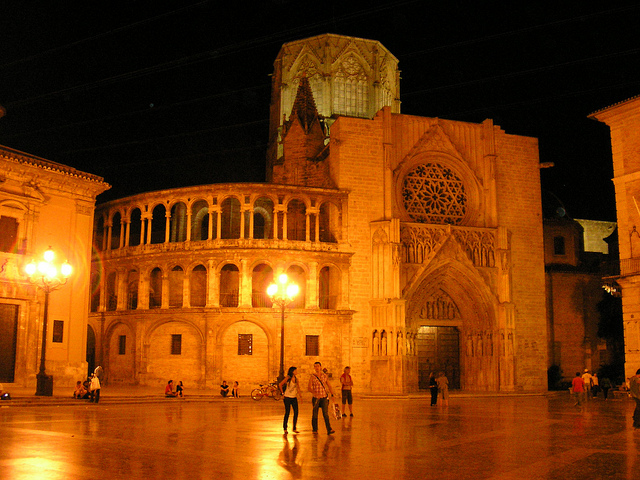 La Malvarrosa beach is located in the north of the district, between the towns of Alboraya and Calle Acequia de la Cadena and is one of the most popular beaches all year round. Stretching for 1000 metres, it is also one of the largest and is covered in fine golden sand. The well-equipped beach is bordered by a promenade with bars, cafés and restaurants, making it a great place to visit even if the weather isn't great.

Eating out is one of the best things to do in Valencia, with an array of fantastic food and drink options available. The region's local cuisine is typically Mediterranean, with dishes such as paella, fresh fish and tapas, but there's something for every taste in the city.

A Tu Gusto is a modern Mediterranean restaurant located in the Quatre Carreres area of Valencia. Every dish is creatively cooked with fresh market cuisine and is beautifully presented for a fine dining experience. With sleek and stylish décor, A Tu Gusto is perfect for an evening meal in Valencia.

For a more casual setting, Delicat is a small and friendly family run restaurant that serves authentic Spanish cuisine. Situated in the centre of Valencia, the intimate restaurant has just nine tables and an outdoor terrace area, but it's worth waiting for a seat as the food is delicious and great value.

Valencia is a vibrant city with an equally as lively nightlife. The old town known as Barrio del Carmen is a great place to head at night, with bars such as Radio City, a popular venue where guests can enjoy drinks and musical performances. Some evenings feature traditional Spanish flamenco performances.

Things to do in Valencia in February

Mid-February means Carnival, or 'Carnaval' in Valencia. There are a number of festivities in Valencia at this time of year, including street parties, concerts, dancing and partying that goes on until the early hours.

Valencia boasts an array of tourist attractions and landmarks. The Miguelete Bell Tower, for example, is located in the Plaza de la Reina and offers stunning panoramic views of Valencia if you climb the 200 steps to the top.

Valencia is also an area that is culturally rich, with many museums and art galleries to visit including the Museo de Bellas Artes de Valencia (Fine Arts Museum), the Valencian Institute of Modern Art (IVAM) and the Valencian Museum of Ethnology to name a few. If you get caught in a down fall at this time of year, these may be just the places to while away your day.

As well as this, for a true taste of Spanish culture, Valencia's Plaza de Toros is a vast and imposing bull ring, whose spectacular architecture should be seen, whatever your opinions on bull fighting are. The controversial sport is not the only activity held within the stadium either, with concerts and festivals also held there.