Mallorca, or Majorca for native English speakers, is a Spanish island that sees an incredible 10 million visitors annually.

This popularity can be attributed to Mallorca's beauty and nearly perfect weather conditions.

Generally these tourists come from nearby European countries, but people from all over the world have appreciated Mallorca's splendour over the years.

If visiting in January, one will want to experience either the celebration of San Antonio Abad or San Sebastian, the patron saint of the island. San Antonio Abad is celebrated on the for two days starting on the 16th with bonfires placed sporadically in the middle of town, a huge feast, a parade, and entertainment provided by poets and singers performing on the city streets.

The celebration of San Sebastian is both a cultural and a religious ceremony as it honours the man who died defending the island's Christianity. This celebration is particularly popular in Pollensa, and festivities last all month long.

Seeing some of the city's sights is a must while visiting Mallorca, no matter what time of year.

For example, the breathtaking Cathedral there is the island's best-known landmark. In addition, visitors should tour the capital on one of the already-scheduled tours designed by the Council of Tourism of the Balearic Government.

The average temperature in Mallorca during January is 49°F (9.4°C).

The average low temperature can reach a chilly 40°F (5°C).

However, that balances well with the average high temperature of 59°F (15°C).

The average number of days per month with precipitation is 5.

The average hours of sunlight daily are 5. 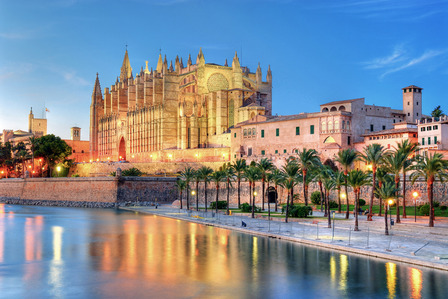