February in Mallorca brings many activities and sights to see.

The 10 million tourists who visit each year are welcomed by the locals at any time of year.

Although summer is traditionally the season that attracts the most guests, some will appreciate the less crowded and cooler summer months in order to truly enjoy all the beauty and intrigue of the island.

In February, the natives of the island celebrate Carnival of Mallorca. This festival involves an amazing amount of Spanish culture for visitors who are interesting in learning about the local customs and way of life. 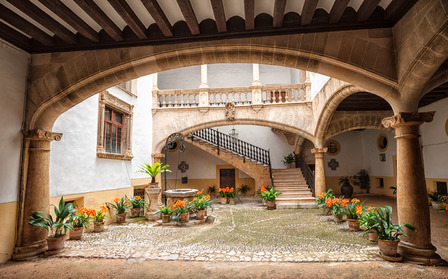 It is sometimes called "the final days" because, with many religious holidays approaching which require the people to consume mostly fish, it is practically the last time many of them will be able to eat meat for quite a while. To begin the celebration, a parade called Dijons Jard proceeds through the streets. Even spectators are encouraged to dress in costume and be an active part of the parade.

In addition to this amazing celebration of culture and religion, tourists can use these colder months to view both classic museums and more modern ones.

The Museu d'Art Espanyol Contemporani, which showcases the likes of Pablo Picasso, and the Es Baluard, which features many temporary exhibits, are just two of the islands popular ones.

The average low temperature is the same as January at 40°F (5°C).

The average number of days per month with precipitation is 5.

The average hours of sunlight daily are 7.