Dubai is one of seven emirates that make up the United Arab Emirates in the Middle East—some other famous emirates are Qatar and Abu Dhabi. This famous city rightly has a reputation for being sunny and very hot. Temperatures in the 40°s are not uncommon and yearly rainfall averages just 150mm in total. The climate is desert-like and can be described as an arid subtropical climate. It never gets cold, with even winter nights seeing temperatures in the mid-teens. If you would like more information on how these weather figures are calculated click here. Dubai is essentially a city of skyscrapers, swimming pools, and golf courses rising out of the middle of the desert—needless to say that it's a spectacularly unique place to visit.

Dubai is home to some of the world's most remarkable and striking attractions. One famous example is the monumental Burj Khalifa, the world's tallest building. Other great highlights include the Burj al Arab, which has to be one of the most exclusive hotels in the world; the Wild Wadi Water Park; the impossibly large Dubai Mall; and the artificial island known as Palm Islands.

Summer (May to September)

Summer can see extremely hot temperatures in Dubai. June to September is the hottest period of the year and the mercury can soar up to 41°C. The overall average temperature is in the low to mid-30°s in summer, peaking at a scorching 36°C in August. In July, the temperature averages 35°C, while in June and September it is 33°C. At this time of year, daily highs average no less than 38°C in June and regularly top out in the 40°s in the mid-summer months of July and August. In fact, average lows never dip below 26°C. Air-conditioning and a swimming pool in your hotel are definitely welcome at this time of year!

Refuge from the beating sun can also be sought in the sea, which averages between 31°C and 33°C during the summer season. These sea temperatures are very high and, for some people, may even be too high to offer much relieve from the heat. Swimming pools at hotels might be a tiny bit cooler, and therefore possibly more popular. You will certainly appreciate your swimming pool in summer as a swim in the sea resembles more a warm bath than a refreshing dip!

The months on either side of June and September—May and October, in other words—are very hot too, averaging around 30°C and often seeing highs in the mid-30s. It can be concluded that Dubai is a hot destination pretty much all year round. You can check the weather forecast here.

Rainfall is extremely low in summer months; so low in fact that the monthly average is negligible. In the course of summer, the emirate doesn't receive more than about 30mm of rainfall in total. You are very unlikely to see rain during summer. Rainfall is very low right from March through to November—most of the annual rainfall occurs in winter, but this is still not very much.

You may expect a lot of sunshine in summer too. June averages a whopping 12 sunshine hours per day, which incidentally is the annual maximum, and you should see the big orange ball for more than 10 hours a day right from April until the end of October. Remember to pack your sun cream, a hat and your favourite shades! Drinking plenty of water is strongly encouraged too, as it helps prevent sunstroke. 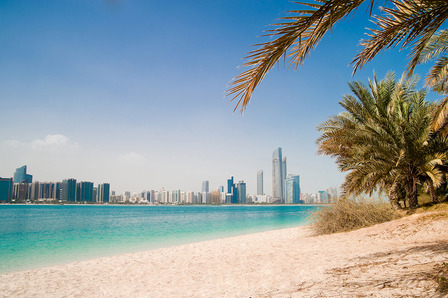 Winter enjoys somewhat more comfortable temperatures in Dubai. December through February are the coolest months, averaging around 19°C to 21°C. With highs in the mid-20s and lows in the mid-teens it is a pleasant time to visit Dubai, especially for those unaccustomed to hot temperatures (as most of us are in the United Kingdom!). Although winter may be the coolest season in Dubai, it is good to remember than these temperatures might just be the warmest season in other destinations—again, it's a warm desert-like destination.

Winter is when most of the annual rainfall occurs. Seeing that annual rainfall is only about 150mm, however, there is still not a lot of precipitation during these months either. Late winter sees the most rain on average; February is the emirate's wettest month, receiving approximately 40mm of rainfall. Put another way, averages show that the winter months receive about 4 to 6 days with some rainfall per month.

That being said; occasionally, heavy rain can occur in Dubai. January 2008, for instance, saw 120mm (nearly all of the yearly average) fall in just 24 hours. Rain this heavy is an exceptionally rare occurrence, but heavy showers may occur each year. If they do occur, they will only be a minor nuisance, though, because they are guaranteed not to last long. Winter months are slightly more humid than other times of the year. Humidity averages about 60% across the year.

The sea temperature remains above 20°C all year, so you can always take a dip even in winter. The sea is at its "coolest" in January and February, when it averages 21°C.

The number of sunshine hours is also at its annual low in mid-winter. All three winter months—December, January and February—have 8 sunshine hours per day on average, which is still extremely high, but lower than the summer peaks.

Spring (March and April) and Autumn (October and November)

Spring and autumn see conditions in between the summer and winter extremes. Late spring and early autumn are very hot, with temperatures nearing the summer maxima. In early spring, the days rapidly get hotter and there is still a risk of rainfall. In April, for instance, the nights are 20°C and warm on average, while the afternoons can get hot, with temperatures reaching 32°C. The average daily temperatures increases rapidly throughout spring—March is 23°C warm, while May is 31°C hot. In terms of rainfall and sunshine, spring and autumn are comparably dry and sunny. The sea temperatures are also pretty much equal between the two seasons, between 25° and 28°C.

Autumn is generally warm and dry, each month not receiving more than 10mm of rainfall in total. Sunshine doesn't vary much throughout the year and autumn therefore gets its fair share of sunrays as well. October has 10 beautiful hours of sunshine per day, while November has 9 hours.

Overall, regardless of the time of year you visit, you are guaranteed solidly good weather in Dubai if sunshine, warmth and swimming are what you are after!